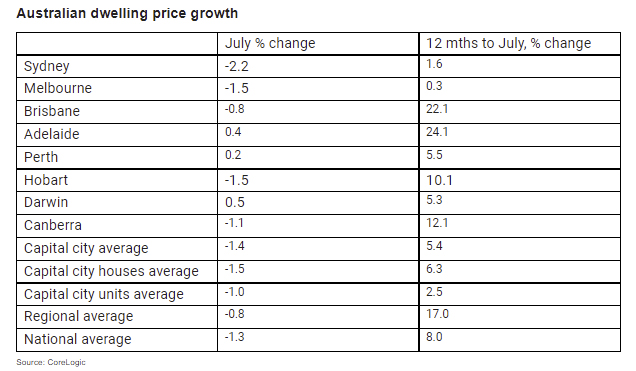 After surging 28.6% between their pandemic low in September 2020 to their high in April – on the back of record low mortgage rates, home buyer incentives, economic recovery, a lack of supply and a coronavirus driven surge in goods demand – average property prices have now fallen 2% over three months. The boom is now well and truly over and the pace of decline in property prices is accelerating. As Sydney saw amongst the strongest gains on the way up and became one of the most speculative and most indebted markets its now leading on the way down.

The key drivers of the downturn are: poor affordability; rising mortgage rates with fixed rates having gone up two to three fold from around 2% to around 6% and variable rates now rising rapidly; a rise in new listings in Sydney and Melbourne; a rotation in household spending from goods back to services; cost of living pressures making it harder to save for a deposit; and a collapse in consumer and homebuyer confidence.

But the main driver of the slowdown so far is the surge in mortgage rates – being able to borrow at a fixed rate of 2% or less was a key driver of the boom in prices with fixed rate lending accounting for 40-50% of new lending about a year ago. But with fixed mortgage rates now up nearly three-fold from their lows and variable rates rising rapidly this has substantially reduced the amount new home buyers can borrow and hence their capacity to pay. As a result, the rug has effectively been pulled out from under the property market.

The downtrend in monthly price gains began more than a year ago – ie well before the start of RBA rate hikes – and reflected poor affordability and then the surge in fixed rates. But the weakness has accelerated since May when the RBA started hiking the cash rate with weakness now spreading from Sydney and Melbourne to other cities and to regional property. 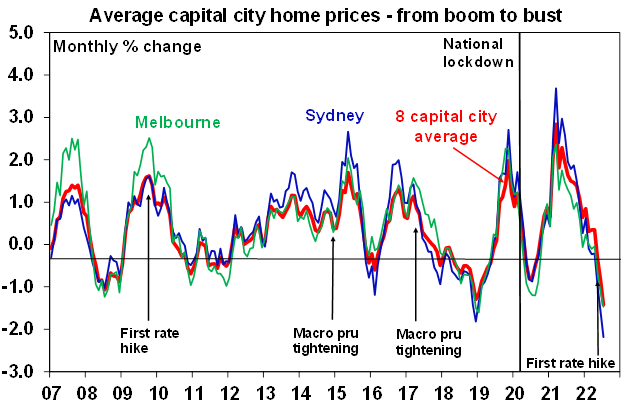 The slowdown in monthly price growth is now seeing annual price growth fall sharply too. Simple mean reversion after a period of well above 10-year average growth warns of a further downturn ahead. 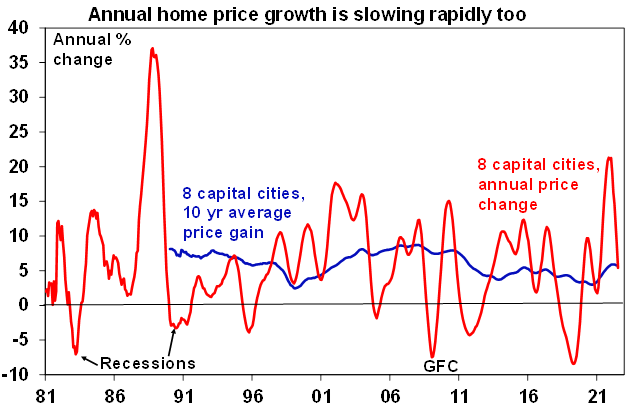 Of course, average home price levels have so far only seen a flick off the top after a huge boom. But the falls are now quite rapid and further falls are likely. So far national average property prices are down 2% from their high over 3 months – which is a pace comparable to what was seen going into the GFC, the run up to the early 1990s recession and in the early 1980s recession. But all of those slumps followed long periods or rate hikes with interest rates at their peaks and about to start falling (see the next chart) whereas this time around we are only three months into interest rate hikes with more rate hikes still to come. The rapidly of the decline in home prices this time around so early in an RBA tightening cycle reflects the de facto tightening that started with rising fixed mortgage rates a year ago but more importantly the heightened sensitivity to rising interest rates flowing from much higher debt levels now and very poor levels of consumer confidence. 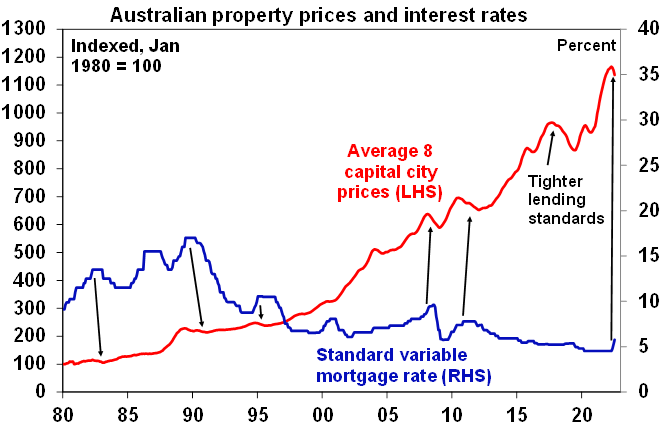 We expect national average property prices to fall further over the next 12-18 months reflecting the combination of: poor affordability; rising fixed mortgage rates; further rate hikes from the RBA pushing up variable rates; high inflation which is making it even harder to save for a deposit; higher supply in Sydney and Melbourne as we come into the spring selling season and some increase in distressed sales from later this year particularly as fixed rate borrowers roll over to much higher interest rates through 2023; and a further rotation in consumer spending back towards services as reopening continues which will reduce housing demand.

Assuming the cash rate tops out around 2.6% early next year as we expect then average prices are likely to fall 15-20% from top to bottom with the low likely being reached in the second half of next year.

The fall in home prices this cycle could well see some cities – notably Sydney and Melbourne – reverse all or much of the boom in prices since their 2020 pandemic low, which will likely see a rise in negative equity for recent low deposit buyers.

Expanded access to home deposit schemes, the Federal Government’s “Help to Buy” scheme, NSW first home buyers swapping stamp duty for land tax next year, the tight rental property market and rising immigration levels will ultimately help to provide a floor for property prices but for now the property market will be dominated by the cyclical impact of rising interest rates.

The main downside risk to our forecasts would be if the cash rate is raised to the 3.5% or so that some and the money market are assuming – this would more than double average household interest payments and push total (interest and principal) mortgage repayments to record highs relative to household income and drive a 30% or so fall in prices.

Fortunately, this seems unlikely as the RBA only wants to cool demand enough to bring inflation back down – not crash the property market and economy. But it can’t be ruled out as recent RBA commentary – describing households as a whole as being in a “fairly good position” to withstand higher interest rates and rates being well below the “neutral rate” – has been interpreted by some as endorsing a rise in the cash rate to above 3%.

On this front though rapidly falling home prices, consumer confidence down around recession levels and signs of slowing consumer spending will ultimately help limit how much the RBA will have to raise the cash rate by and so we see the peak in the cash rate being around 2.6% rather than 3.5%.

The main upside risk to our forecasts would be if inflation quickly subsides allowing the RBA to ease up on the interest rate brake well before reaching 2.6% for the cash rate. At present this looks unlikely given the ongoing upwards pressure on inflation, but we do expect the RBA to start cutting rates in late 2023 and this should help property prices start to bottom out late next year.

So far, the national property downswing looks like just another cyclical downswing, albeit it’s a bit more rapid. But note that the 25-year bull market in capital city property prices is likely to come under some pressure in the years ahead as the 30-year declining trend in inflation and hence mortgage rates which has enabled new buyers to progressively borrow more and more, and hence pay more and more for property is now likely over.