2022 is an important year for the Beetaloo Basin as major participants undertake work programmes which will help define the commercial parameters of development in the area. The recent Federal election has seen some questions raised over the basin’s future while gas prices, volumes and forecasts all point to strong demand. With the half-year fast approaching, we have put together an overview of what’s been happening.

There has been a change of Government at the Federal level with the ALP looking as if they will form a majority government in Canberra. As well, there has been change in the Northern Territory Ministry following the resignation of Chief Minister Michael Gunner over a fortnight ago. While some speculated that this could be a negative for Beetaloo development, it has actually resulted in a clear reaffirmation of the commitment that both major sides of politics have to the Basin and the role of Natural Gas in Australian energy supply.

The new Chief Minister of the Northern Territory, Natasha Fyles, has clearly stated that developing the Beetaloo is still a priority for the Labor Government. She went further to indicate that the project will play a major role in developing an economy that is not as cyclical as it has been in the past – with a target to grow it to a $40billion economy by 2040.

Deputy Chief Minister and Mining & Industry Minister Nicole Manison indicated that they had worked closely with Federal Labor (when in Opposition) and there is a common understanding of how critically important the development of the Beetaloo is and the NT gas industry along with it.

The only hiccup appears to be the Greens holding power in the Senate and while the development of the Beetaloo will almost certainly cause a proliferation of statements from them, it’s difficult to see an impediment to the collective will of the Federal Government, Federal Opposition and the NT Government.

Both Australian and global gas markets have been volatile but strong over the last 12 months – with robust volumes being recorded over summer (see fig.1). Of concern though now, though, is the surge in the cost of wholesale gas, with prices doubling in the last month and tripling since the start of the year. This price spike has been caused by the increased use of gas for electricity generation due to coal power outages and lower than usual levels of renewable energy generation. Longer term, a number of Australian bodies including the ACCC continue to forecast a supply shortfall in domestic gas from 2024. In addition, global pricing has moved sharply higher, due largely to the invasion of Ukraine. With these factors in play, it is hard to see anything other than strong gas markets into the future. We will explore gas markets in another article over the next fortnight. 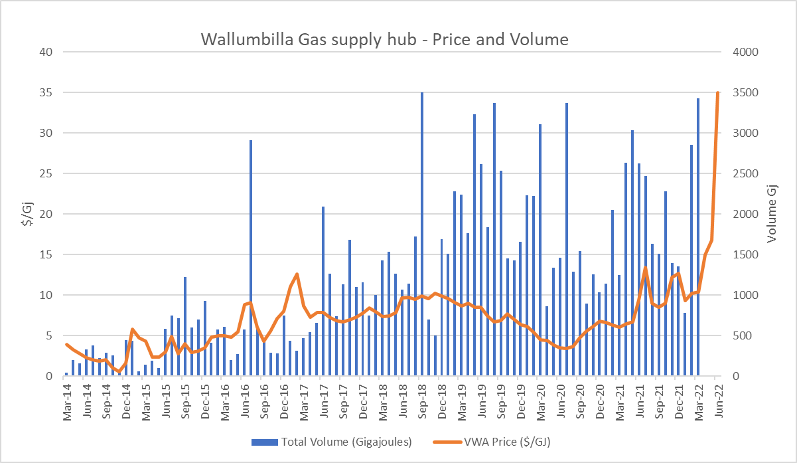 The current exploration activity taking place in the Beetaloo is being undertaken mainly by Tamboran Resources, Santos/TBN, Origin Energy/Falcon and Empire Energy. The figure below shows the location of the main exploration permits (EP’s). 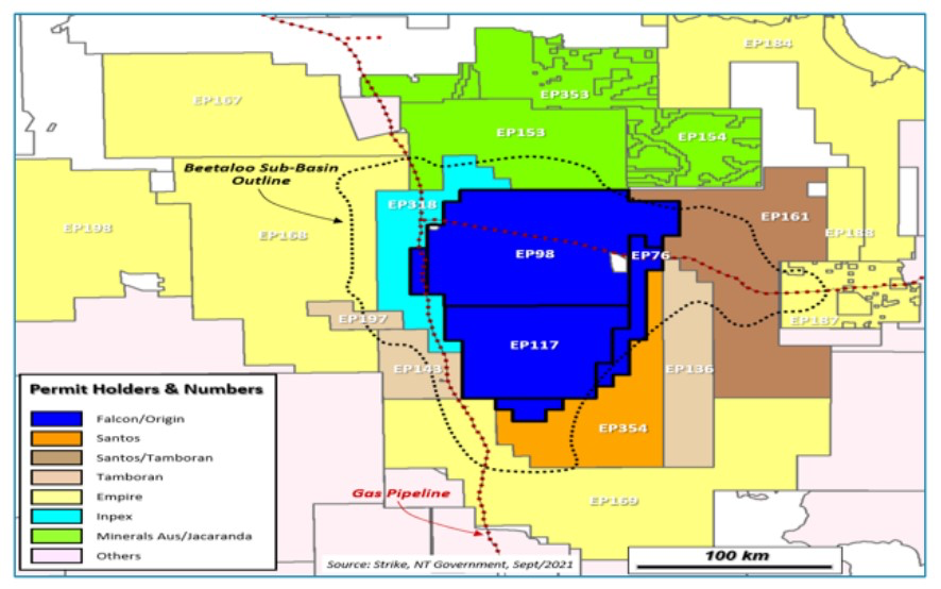 The next 3 to 6 months promises to be a very exciting period for TBN. It will see the first well, Maverick 1, being drilled into the 100% owned EP136.

EP161 (Santos 75%, TBN 25%): Tamboran’s Third Quarter report was lodged in late April and reiterated the positive results from wells Tanumbirini 2H & 3H on EP 161 (Santos 75%, TBN 25%). Flow rates from these wells were recalibrated and average gas flow rates were indicated to be 3.0mmscfd and 2.9mmscfd respectively (normalised over 1000metres). The wells confirmed the productivity and commercial of the Velkerri B Shale.

EP136: The second quarter has seen TBN continue to plan for the spudding of Maverick 1H (M1H). The company has secured Ensign Rig 970 and plans for drilling to begin around mid to late August 2022. As outlined in a number of presentations, TBN plans to drill a 1000m horizontal section and aims to have around 20 fracture stimulation stages. The increasednumber of fracture stages will enable the company to work towards a better understanding of the potential productivity of the Velkerri shale when US style unconventional well completions are utilised.

From a resource perspective, Netherland, Sewell & Associates certified a:

At the corporate level, it should be noted that the TBN register continues to see further share purchases by Directors and senior management. 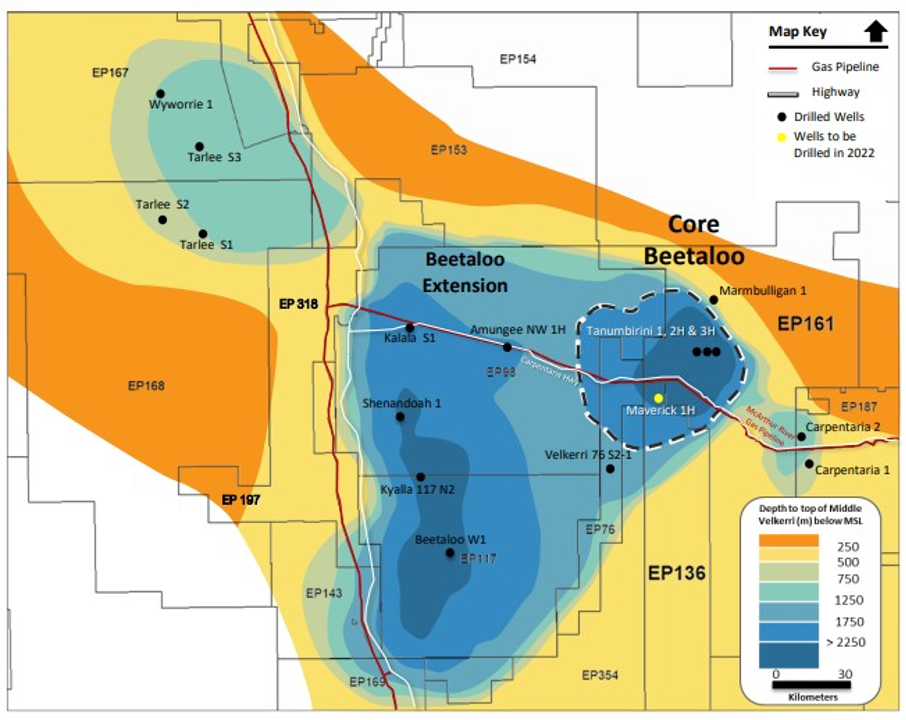 They noted that all civil works had been completed and that mobilisation of hydraulic stimulation equipment was underway however delivery of some fracture stimulation chemicals had been delayed due to global supply chain issues – they expected to arrive in mid June.

The C- 2H well has a 1345m horizontal section, or lateral, which has been cased and runs through the highly prospective Velkerri B formation – they plan to access 1250m of the lateral for hydraulic stimulation with up to 25 stimulation stages.