Synlait Milk Limited (ASX: SM1 $3.31) is a dairy processing company which benefits from the unique New Zealand environment. Based in Canterbury, New Zealand, the company manufactures and sells a range of milk powder and milk powder related products including infant and adult nutritional formulations, functional food ingredients, and specialised products.

Among the largest shareholders are Bright Dairy Holding Limited and The A2 Milk Company Limited who are key infant formula customers. The company distributes globally notably sending its products to China, Asia, the Middle east and Africa.

Synlait’s mission is to Do Milk Differently for A Healthier World and in 2000 became part of the B Corp community using business as a force for good. Certified B Corporations™ consider the impact of their decisions on their workers, customers, suppliers, community, and the environment. 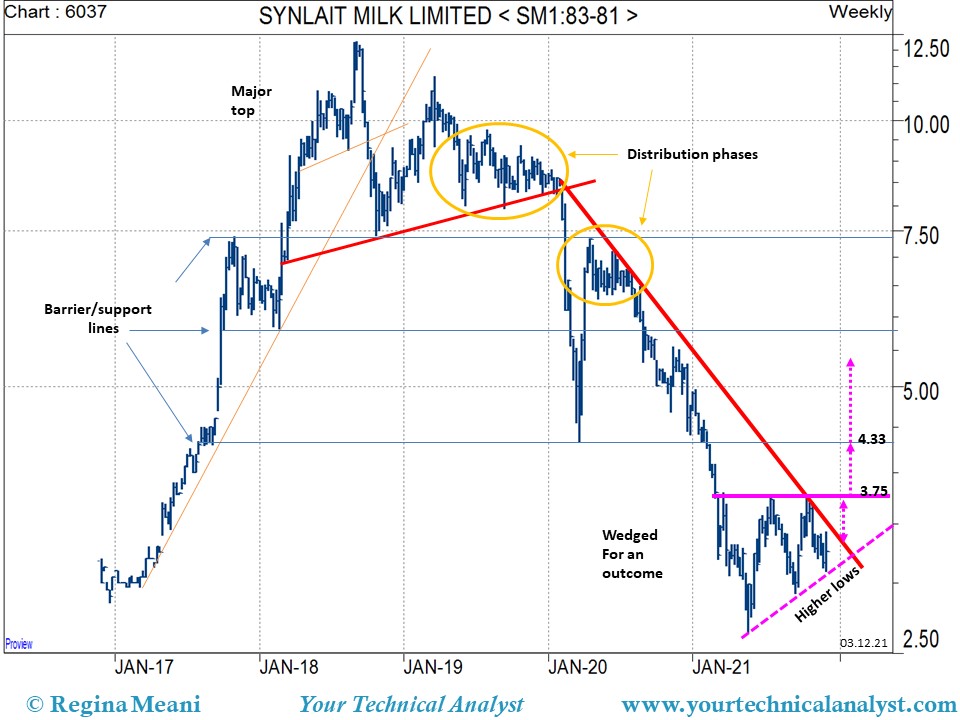 From 2017 the share price action for Synlait has resembled a roller coaster ride. In December 2016 the price registered a low point at $2.85 and from here the price spiralled upward until it reached a peak price at $12.28 in September 2018. The price topped out from a combination of the magnitude of the gain and divergent momentum and fell initially to $7.40 where it gained some support and rallied back towards the peak but halted in March 2019 at $11.20 as the action proved unsustainable. A downward distribution phase developed during the rest of 2019 until the $7.40 support was broken on a price plunge that saw the price drop to $4.33 by March 2020. 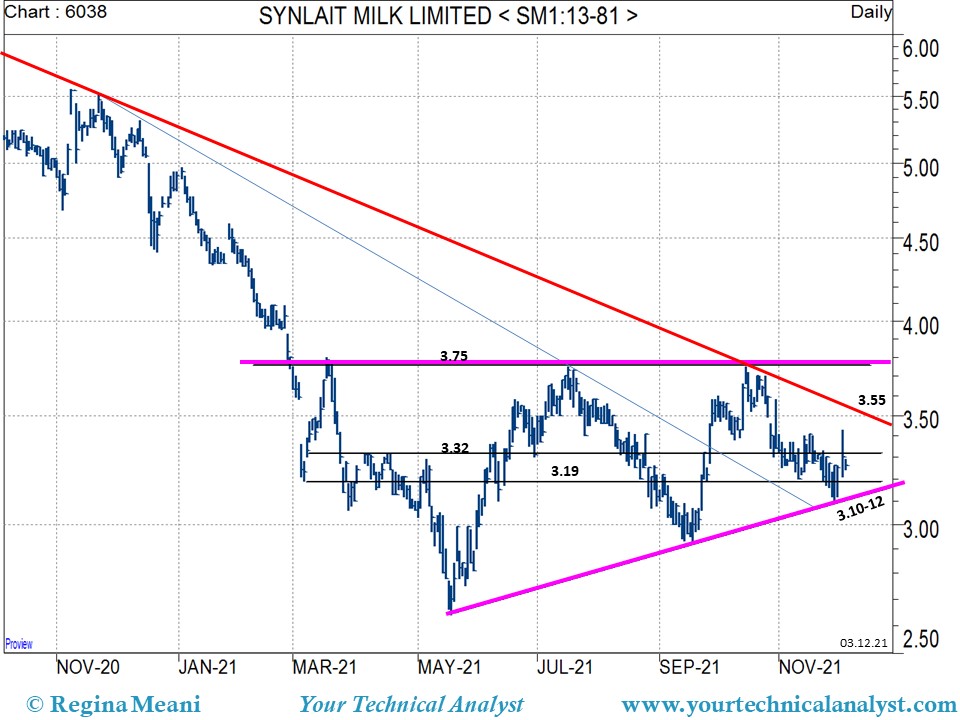 In reaching $4.33 the price had exceeded its downward expectations and pushed momentum into oversold. This produced a pivotal turning point and strong recovery quickly reaching back towards the $7.40 zone but this had now become strong resistance. The price was deflected and another distribution phase occurred and triggered a sell-off throughout the end of 2020 and into 2021.

On 19 May 2021 at $2.64 the price found another pivotal turning point located along a parallel of support and combined with oversold momentum spurred a rally to $3.75 by 16 July but momentum had turned negative and combined with near-term resistance the price halted and fell into decline.

Within this downturn, however, the price located a higher turning point at $2.92 on 17 September promoting a rally back to the $3.75 resistance, reached on 14 October. The price was deflected but again found a higher turning point at $3.09 on 29 November. The entire action from March this year has the appearance of a reversal phase with a rise through $3.45 indicating the potential to re-test the $3.75-80 barrier zone. A breakaway from this zone would complete the base and suggest the potential towards $4.30 and then $5.00 and possibly beyond as a new upward path is established.

Until the base is completed through $3.75 there remains the risk that the downward influence prevails and would be signalled on a drop through the $3.10-20 support zone.

Note on Thursday 2 December the price reached $4.43 but the daily candle showed rejection at this level and the price closed at $3.30 back within the $3.19- 3.32 inner parameters of the phase. On Friday the stock produced an inside day candle and Monday’s trading will determine whether the action is bullish as the candle must be an up candle that closes above the close of the second candle. That means that Monday’s close must be above $3.31.