Dr Shane Oliver, Head of Investment Strategy & Chief Economist at AMP, discusses the RBA’s rate hike and why consensus expectations for a rise above 3% are too hawkish.

As widely expected, the RBA has increased the cash rate again by 0.5% taking it to 1.85%. This is more than double the 0.75% rate that applied before the pandemic started. The 175 basis points in rate hikes since April is the fastest back-to-back series of rate hikes since increases of 0.25%, 0.75% and 1% in October, November and December 1994 respectively.

In justifying another 0.5% hike the RBA noted that: inflation is the highest its been since the early 1990s and set to rise further with strong demand and a tight labour market playing a role; the labour market remains tight and businesses are pointing to a lift in wages growth; and it is important that medium term inflation expectations remain “well anchored”. While the RBA downgraded its growth forecasts to 3.25% for this year and to 1.75% for the subsequent two years it revised up its inflation forecast for this year from 6% to 7.75% and to 4% in 2023. 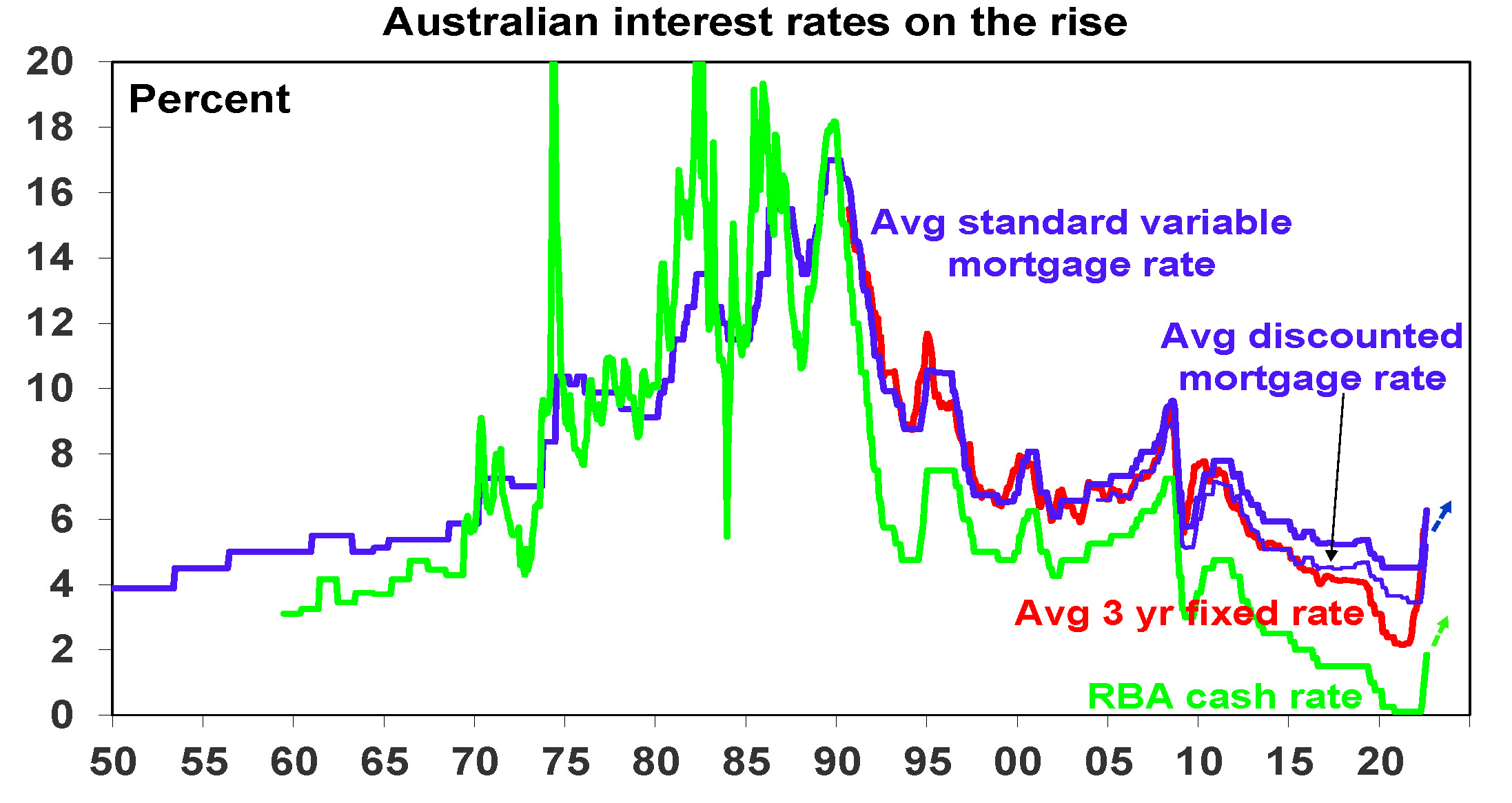 The RBA’s commentary remained hawkish reiterating that it will do “what is necessary” to return inflation to target and it indicated that it expects to raise interest rates further. Banks are likely to pass the RBA’s rate hike on in full to their variable rate customers and deposit rates will rise further.

Getting inflation back under control is critical as a rerun of the 1970s experience of high inflation will be disastrous for Australians, the economy and investment markets. So the RBA is right to sound tough and act aggressively now. However, we remain of the view that the cash rate won’t have to go as high for the RBA to cool demand enough to take pressure off inflation and keep inflation expectations down as the futures market and some economists are expecting. The futures market has lowered its expectations for the cash rate from above 4% two months ago but it and the consensus of economists is still factoring in a rise over 3% and some economists see it rising to 3.6% next year. There are five reasons why this is too hawkish:

#1 Global supply bottlenecks are easing and this will take pressure off inflation. This is evident in various global business surveys showing reduced delivery times, falling work backlogs, lower freight costs, lower metal and grain prices, and falling input and output prices. As a result, our Pipeline Inflation Indicator for the US is trending down. Core inflation in the US is showing signs of having peaked and Australia appears to be following the US by about six months, pointing to a peak in inflation here later this year. A return to more normal weather after the floods should also help lower local food prices. 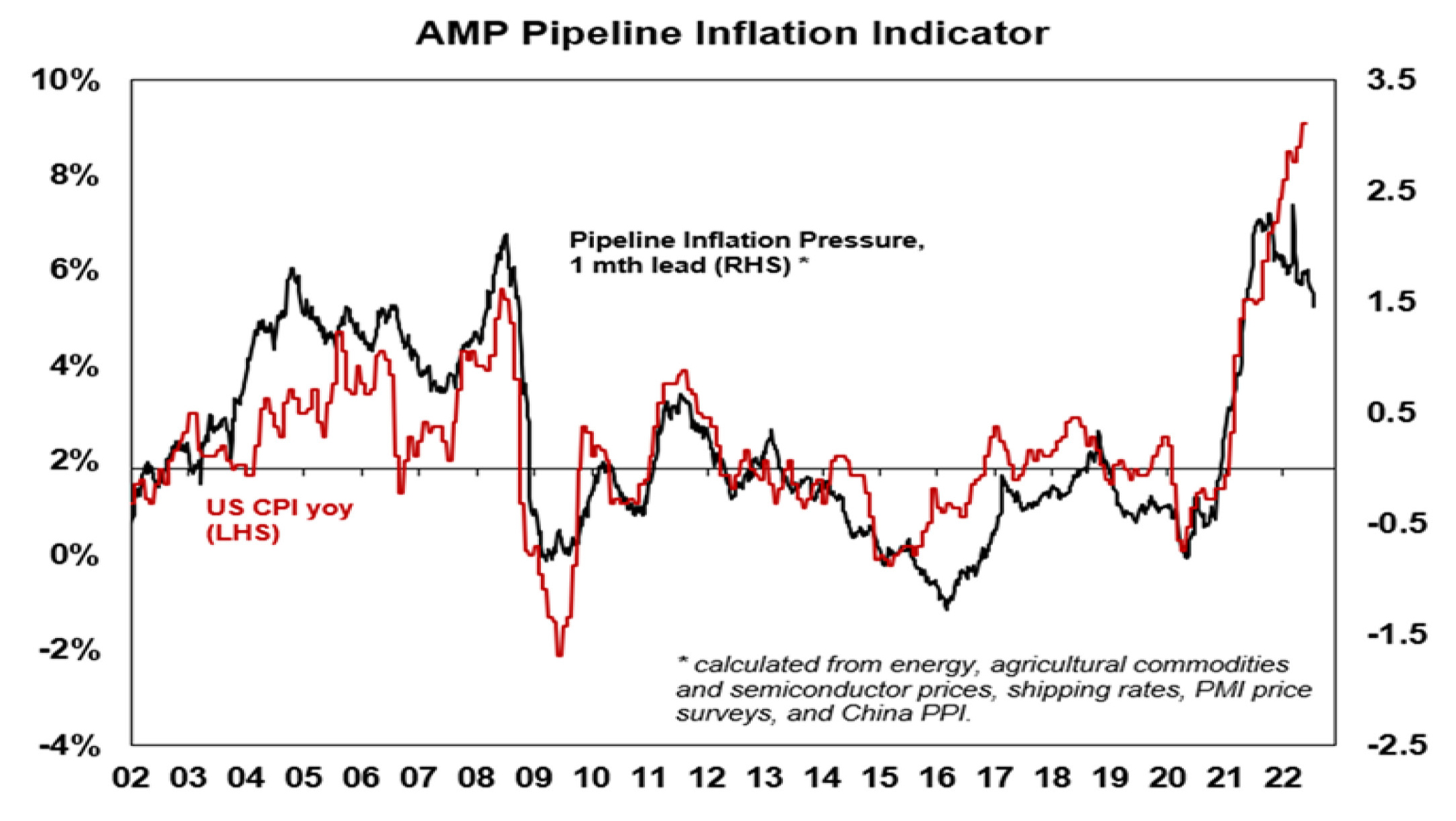 Related to this, while global energy prices (for oil, coal and gas) are likely to remain high, they may be at or close to their peak so their contribution to ongoing inflation may go to zero later this year. In Australia, some pressure may also come off electricity prices next year as the number of generators offline due to maintenance and breakdowns decline.

#2 Don’t read too much into what the RBA is saying. Some have interpreted the RBA’s recent comments – describing households as a whole as being in a “fairly good position” to withstand higher interest rates based on scenarios involving a 3% rise in interest rates and rates being well below estimates of “neutral” – as consistent with the cash rate likely rising above 3%. While the RBA has to sound tough to keep inflation expectations down, there is a danger in reading too much into its commentary regarding the path for interest rates. RBA commentary late last year indicating that it did not expect the cash rate to start rising before 2024 based on their then forecasts was not so reliable as it changed tack quickly once it was clear that it was wrong on inflation. It could easily do the same again.

The RBA is just another forecasting outfit – albeit with more resources, but this does not make it any more accurate than other commentators when it comes to interest rates. It also has a role in influencing expectations that other commentators don’t have. So reading too much into its guidance can be misplaced.

#4 Many households will see significant mortgage stress with a 3% or more rise in interest rates. On average, the household sector is in reasonable shape once the rise in wealth, a build up in excess saving and mortgage buffers (people being ahead on their repayments) is allowed for. But averages can be deceiving – a bit like having one arm in the freezer and one in the oven and saying on average you are okay. While RBA analysis shows that just over one third of households with a variable rate mortgage will see no increase in their payments with a 3% rise in interest rates, more than a third of all households with a mortgage – whether variable or fixed – will see a greater than 40% increase (and much more so for those on fixed rates). Roughly speaking, this is about 1.3 million households. This, at a time of falling real wages, will have a huge impact on spending in the economy and risk a significant rise in forced property sales. Coming at a time when home prices are already falling rapidly due the impact of rising rates on home buyer demand it will only add to home price falls, which will weigh further on consumer spending.

Looked at another way – a new borrower with an average $600,000 mortgage will have seen around a $600 a month increase in their monthly repayment since April once the latest rate hike is passed through. That is roughly an extra $7000 a year. Taking the cash rate to 3.1% would imply an extra $12,300 a year since April in mortgage payments. This is a huge hit to the household budget and spending power.

The surge in house prices and hence household debt levels over the last 30 years was made possible by falling interest rates. A rise in the cash rate to 3% or more would push total mortgage repayments (ie, interest and principal) to record highs relative to household income.

# 5 It looks like the RBA is getting traction in slowing demand – far earlier than normal. While job indicators are still strong these are lagging indicators. By contrast consumer confidence is at recessionary levels & well below where it’s been at this point in past RBA rate hiking cycles. 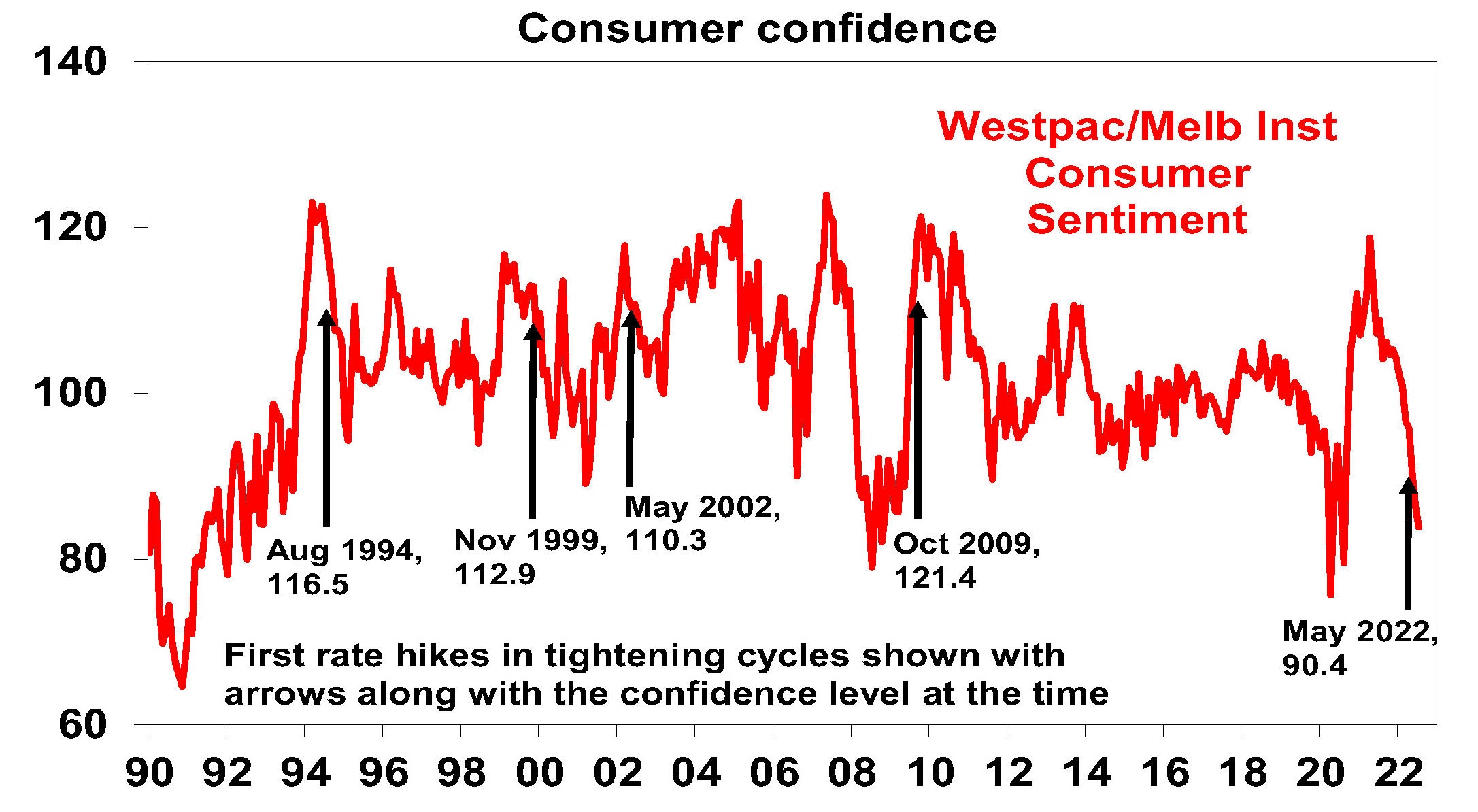 Likewise, national average home prices are falling with the pace of decline accelerating in July, with the 3-month rate of decline comparable to that seen in the GFC and the recessions of the early 1980s and 1990s. This will depress consumer spending via negative wealth effects. 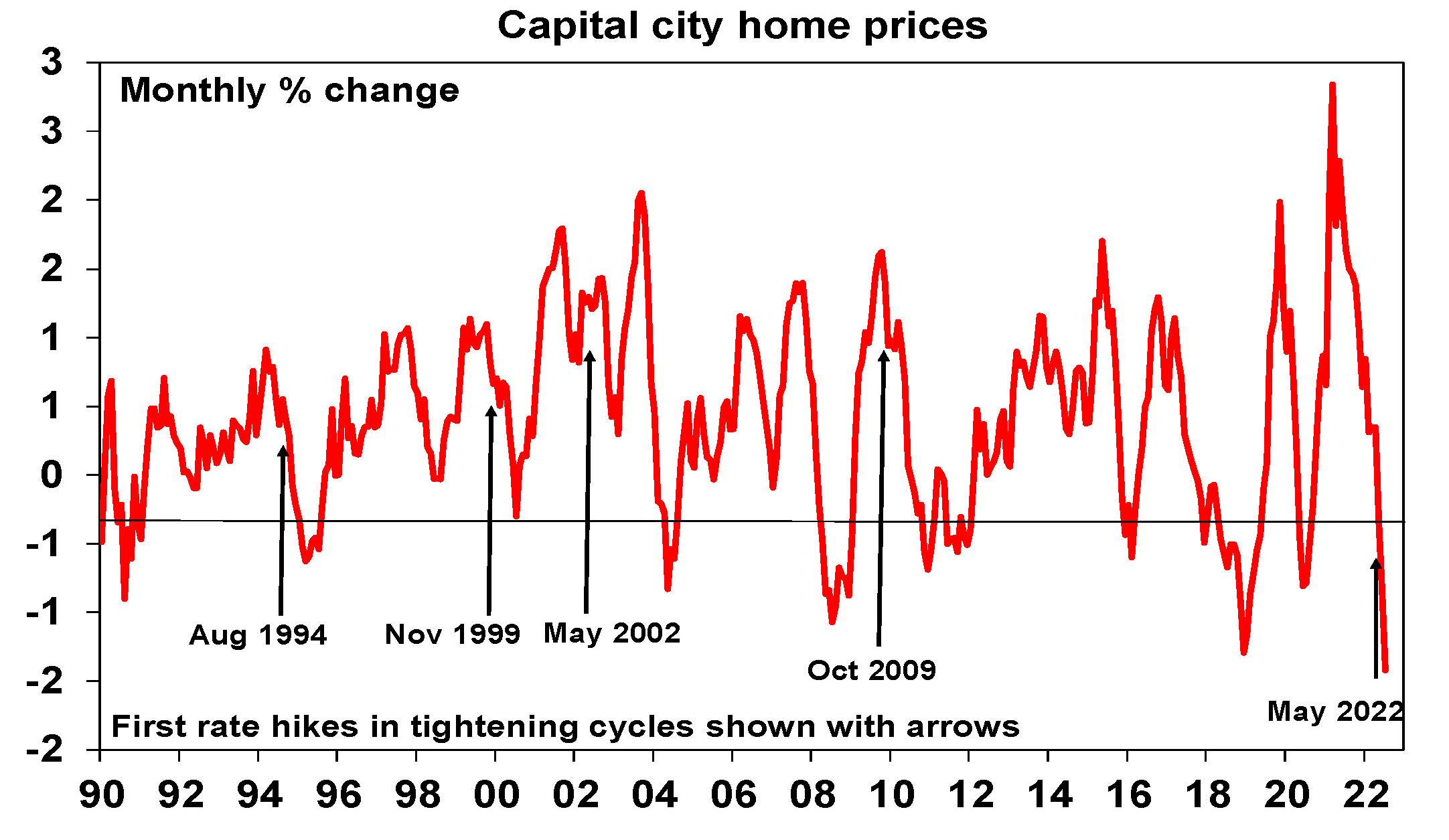 The earlier than normal hit to confidence and house prices reflects a combination of: higher household debt levels compared to what was the case in past rate hiking cycles; the fact that this tightening cycle started with the sharp rise in fixed mortgage rates that started last year; and cost of living pressures that have seen an unprecedented plunge in real wages. There is tentative evidence that this is starting to show up in slowing consumer spending with credit and debit card transactions looking like they are slowing, hotel and restaurant bookings looking like they are rolling over and July retail sales implying now falling retail sales in real terms. So, RBA monetary tightening appears to be getting traction earlier than would normally occur in an interest rate tightening cycle. All of which will start to take pressure off demand and hence inflation.

For these reasons, our assessment remains that the RBA won’t need to raise the cash rate above 3% and that the peak will be around 2.6% either later this year or early next. By late next year rates are likely to be falling. This implies a slowing in the pace of rate hikes ahead which should help head off worst case scenarios for the property market and the economy.