Wall St bounced back after global indexes were sold off on concerns amid China extending lockdowns and the impact on economic growth. Commodity prices took a hit as investors weigh the impact from prolonged lockdowns, adding to what rising interest rates and a stronger greenback could mean around the cost to buy.

Good morning. What a comeback. I’m Melissa Darmawan for Finance News. This is your market outlook.

The Australian sharemarket is set to fall after a volatile session on Wall St.

US stocks closed higher, reversing its earlier losses following its steep sell off on Friday. Dip buyers emerged after the Dow was down 488 points and then closed higher while the treasury yield retreated, helping the Nasdaq’s rally.

Stocks bounced after the Nasdaq Composite fell into a bear market last week. The Nasdaq is now down 19.8 per cent from its record, while the S&P 500 is back in correction territory, down 10.8 per cent from its high. The Dow is coming off its worst one-day performance since 2020 on Friday and four straight losing weeks. The S&P 500 and the Nasdaq fell for three consecutive weeks.

All three indexes fell after shares in China suffered their worst selloff in more than two years as they continue to stick to its zero-Covid strategy. Concerns continue to mount about a slowdown in global growth amid rising Covid-19 cases in China, not just in Shanghai, but now in Beijing, sending oil prices and the broader commodities complex lower on anticipated lower demand.

Investors are preparing for a big week of corporate earnings with big tech and several behemoths like Alphabet, Amazon, Apple, Microsoft on the docket. These valuable companies make up a large portion across the major indexes which means that when they report after hours, it will dictate the path forward for their share price the following day.

Across the S&P 500 sectors, seven winners to four losers. Communication services led the pack, up 1.5 per cent thanks to Twitter, followed by information tech, up 1.4 per cent. Energy plunged 3.3 per cent, followed by utilities, down 0.7 per cent, and real estate.

The yield on the 10-year treasury note fell by 8 points to near 2.82 per cent, gold fell amid global slowdown fears on a firmer greenback.

China stocks come under renewed selling pressure
Elon Musk is officially to buy Twitter as the social media company’s board gave the thumbs up to the deal, taking the company private. Shares climbed towards the takeout price before going into a trading halt, however, analysts cite that the discount from the offer price of US$54.20 and the closing price shows uncertainty due to how fast this deal happened. Shares in Tesla turned lower as investors sold on concerns on how he’s going to stretch himself across the two, while shares in President Donald Trump’s special purpose acquisition company Digital World Acquisition Corp, tumbled 12.9 per cent.
Yesterday, it was the worst day for mainland stocks in China since February 2020 at the height of the pandemic, tanking over 5 per cent. Why? Firstly, it followed Friday’s session last week where investors were concerned about inflation and the tightening of financial conditions amid higher treasury yields. A hit there. Secondly, investors then digested that the world’s second largest economy is set for a more intense lockdown, climbing the wall of worries on how serious the dent would be to economic growth, and how it would contribute to higher inflationary pressures. In the bond market, treasury yields fell as traders bought into bonds taking risk off the table. This is why we saw a sell-off, it’s more than a hit, that’s a double whammy.

What are the knock on effects?

These moves flowed in the commodity and currencies space because China is the biggest consumer of commodities in the world.

Oil prices today fell to their lowest in nearly two weeks amid growing concerns about lasting Covid-19 lockdowns in Shanghai and higher interest rates in the US, all factors that would put a break on global demand.

To buy commodities, a weaker yuan against a stronger greenback means that it lowers China’s purchasing power of commodities. The couple was down 1 per cent, that is a lot for the currency pair, the biggest dramatic move since March 2020.

The move in China has knock on effects and that is why commodity prices got smashed and shows the role of China in the global economy. Bear in mind, that oil is also under tight supply due to Western sanctions on Russian oil stemming from the war in Ukraine. It will be interesting to see if we are going to hear from the PBoC today about this.

What does this mean for Australia?

The risk of further lockdowns in China could see tailwinds for us, given that they are our biggest trading partner. A slower economic growth would mean that demand for our commodity imports could be on the cards and put a lid on our Aussie dollar strengthening. You can see here in the graph the ink of the Aussie dollar and the iron ore price from Bloomberg. 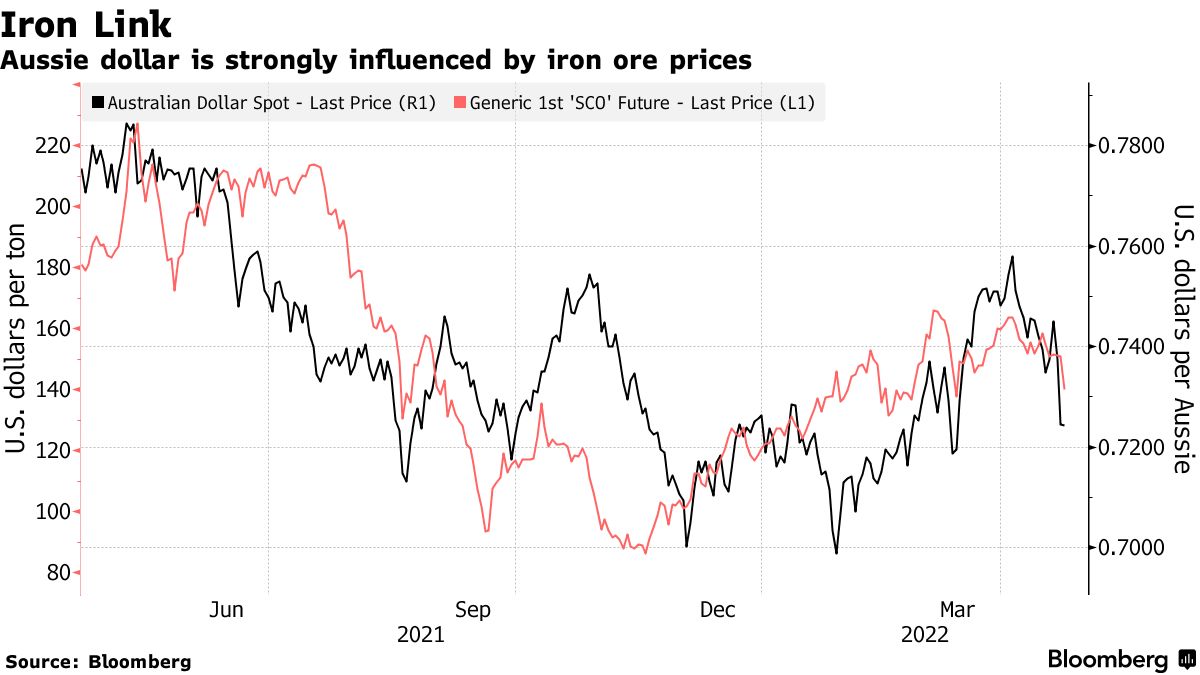 Across the Atlantic, European markets closed lower. Paris lost over 2 per cent, Frankfurt fell 1.5 per cent while London’s FTSE fell 1.9 per cent. On the London Stock Exchange, Rio dropped 5.2 per cent, BP fell 6.2 per cent and Shell lost 5.2 per cent on concerns that extended lockdowns in China would weigh on demand for metals and crude oil.

Taking all of this into the equation, the SPI futures are pointing to a 0.3 per cent fall.

Brace for a negative start today as we play catch up after the long weekend with iron ore miners set to lead the declines such as BHP (ASX:BHP) to be the biggest weight as the index’s largest company. The iron ore price was down almost 8 per cent yesterday.

Due to the break, trading volumes are on the light side and are set to exacerbate volatility ahead of the anticipated inflation figures locally tomorrow and on Friday.

A few broker moves with Aristocrat Leisure (ASX:ALL) rated as a new hold at Jefferies with a price target of $34.72 and OZ Minerals (ASX:OZL) upgraded to a buy from hold, while Morningstar upgraded its rating for BHP Group (ASX:BHP) to hold from a sell.

In terms of companies, Ansell (ASX:ANN) is set to shut its factory in Russia in June, a year after it opened the plant in the wake of the Russian invasion of Ukraine as it takes the final steps towards ending its business in Russia, where it had a market share in higher-end medical gloves of up to 80 per cent, according to the AFR.

The bidding war continues with AMP (ASX:AMP) amid Mirvac Group now in advanced talks with investors to take control of AMP Capital’s flagship office fund, in a deal slated to occur in parallel with Dexus’ wider move on AMP’s asset management arm, according to the AFR.

If you’re into NFT’s, non fungible tokens which are smart contracts tied to digital goods by way of a QR code that’s all recorded on a blockchain, Treasury Wine (ASX:TWE) could be a company to watch today. Following reports from Bloomberg, luxury wine makers are betting on NFTs.

There are 3 companies set to pay eligible shareholders today