Victorian gold explorer North Stawell Minerals (ASX:NSM) has provided an update on its exploration programs. The aircore rig has continued the regional first pass drill program that targets mineralisation beneath shallow cover, which could potentially be structural repeats of the multi-million ounce gold deposit at Stawell Gold Mines.

Aircore drilling has extended and refined a gold mineralisation trend to 1000 metres strike, open to both the north and south, as drilling continues to confirm the link between coincident gravity and magnetic anomalies, and gold mineralization. 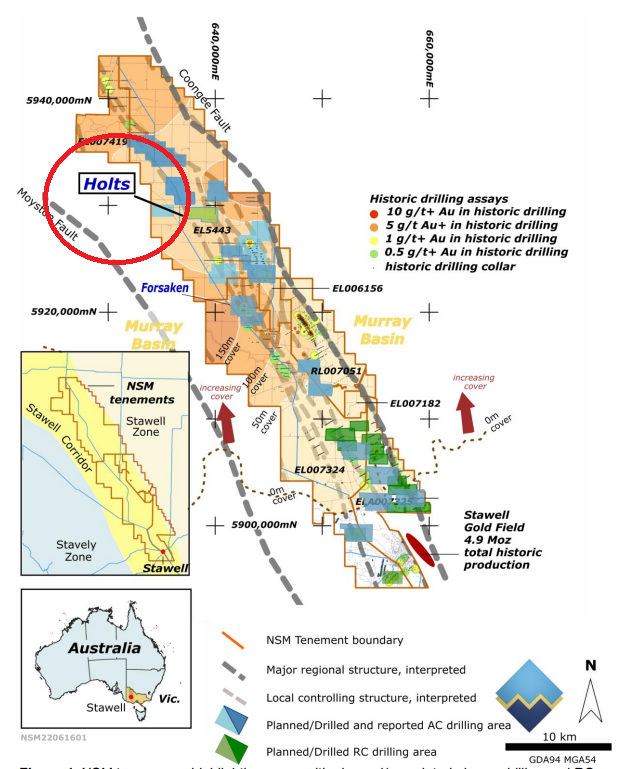 The Holts program is the 10th target with returned results in NSM’s regional Phase 1 aircore program. Following the first pass drilling, the most encouraging areas will be returned to for infill drilling in a Phase 2 program.

Looking for a gold rush? What to expect?

The update comes as the company explores the Stawell area to the north of the existing Stawell Gold Mine. The area has a history – gold was first discovered in Stawell in 1853 and is one of Victoria’s historical gold provinces.

North Stawell Minerals (ASX:NSM) has identified around 20 targets and has started to test the individual targets.

Glenorchy, Gready, and Lubeck Tip are targets that have been tested using an air core rig, drilling vertical holes down to the contact. The grades have come back with gold intercepts, indicating gold mineralisation – a positive sign.

In the next two months, the gold explorer has said that they will be informing investors around the results from the various targets that will be drilled with an air-core rig. As part of the assessment, North Stawell will have their geology team review and compare the data to the results found at the Stawell Gold Mines.

To give you some context, the two executives have extensive experience and expertise in the field.

Mr Morgan was the former CEO of the Western Mining Corporation and has held various high-level positions in several Australian businesses, public bodies and community groups. He was twice a member of the board at the Reserve Bank of Australia, worked as the director of the Australian Stock Exchange for seven years and served two years as president of the Business Council of Australia, according to Ducere Global Business School.

While Mr Olson has a long career in private equity and operational management in the mining industry, according to Business News. He has managed exploration programs, JORC-compliant resource estimate programs, mine design and operations primarily across iron ore, silver and rare earth metals.

Does Arete Capital Partners have skin in the game?

Investors will keep an eye out for further results to see if North Stawell Minerals (ASX:NSM) finds a multimillion-ounce deposit. If they do, they are one step closer to another gold mine.

Shares in North Stawell Minerals (ASX:NSM) are flat at 14 cents.