Wall St roared as investors felt optimism on the news from China with no new Covid-19 cases for three days in Shanghai and several economic figures, indicating the strength of the company. Travel stocks took-off, banks stock rallied, riding on the coattails of Berkshire’s latest move.

Our next investor event is on next Tuesday 24 May, at 12.30 AEST with Shaw & Partner’s market strategist Martin Crabb, and six CEOs presenting. Make your way to fnn.com.au to register for your free online spot.

Relief-rally on Wall St pulled up by tech

US stocks closed sharply higher after retail sales eased concerns, at least for now about a slowdown in US economic growth. There were a series of bullish catalysts in this nice relief-rally as investors picked up some bargains however, the same uncertainties still persist.

The rally was almost across the board with the S&P 500 led by information tech up a2.9 per cent, followed by materials, financial and energy, adding up to 2.8 per cent each. Consumer discretionary got a boost thanks to flight stocks which we will talk about shortly with consumer staples as the only loser, down 1.2 per cent dragged down by missed earnings by Walmart.

Investors rotated out of defensive assets, the yield on the 10-year treasury note rose 11 basis points to 2.99 per cent amid a softening in gold and the greenback.

Investors had a series of positive news coming in boosting sentiment.

Firstly, binary news in China as Beijing is set to ease its regulatory crackdown on the country’s internet companies. Covid-19 cases are continuing to fall while talks to exit lockdowns in June are on the table.

Secondly, investors learned that consumer spending is still strong despite how high prices are due to inflation. Retail sales in the US rose 0.9 per cent over the month in April in line with consensus, according to the US Commerce Department. It was the smallest gain in retail trade in four months as you can see in the graph there.

Thirdly, earnings from Home Depot reinforced the picture with the retail sales numbers which showed that the everyday American is coping through the cost of living increasing.

This is important as consumer spending makes up two thirds of US GDP. If it’s strong, the tightening of financial conditions will continue by the Fed, which means easing of demand.

The question is, how long will this last? Sales at gas stations were down by 2.7 per cent. This is due to the Biden administration stepped in by tapping into the Strategic Petroleum Reserve. It will be interesting to see what May’s figures will look like since the price at the pump is back at record highs. As budgets get tighter and the longer this goes on, consumers may start to cut discretionary spending, which would hurt some retailers over others. A sector to watch.

Travel stocks took-off after United Airlines upgraded its revenue outlook for the second quarter on improved consumer demand. United Airlines, Delta and American Airlines rallied in the order of six to eight per cent.

Finance stocks advanced after Warren Buffett’s Berkshire Hathaway bought US$3 billion shares in Citigroup which is about 2.8 per cent stake in the company, sending shares up 7.7 per cent to US$51.05. The investment came as Berkshire sold the remainder of its position in Wells Fargo, a rival bank that had been a staple in Buffett’s portfolio for more than three decades.

We saw this yesterday on the ASX where investors respond after finding out about an investment manager’s intention to buy in or sell out of companies. An example of this was with Magellan Financial yesterday. Aussie investors learnt about a Norwegian fund manager exiting $2.7 million of Magellan in March to beef up 247 holdings, mainly Tesla and a plate of tech giants. Magellan was the second worst performer of the session before closing 4.4 per cent to $14.56.

On the London Stock Exchange, Rio jumped 2.5 per cent, BP gained 0.7 per cent and Shell added 0.6 per cent.

Yesterday, the Australian sharemarket closed 0.3 per cent higher at 7,113.

Taking all of this into the equation, the SPI futures are pointing to a jump of almost 1 per cent.

The Australian Bureau of Statistics’ wage price index for the March quarter is likely to show Aussie’s pay grow at half the rate of inflation. The closely watched indicator by the Reserve Bank of Australia is set to show wages growth by 0.8 per cent in the period.

If we take this strong lead from Wall St, technology shares could take the winner’s seat, knocking energy off its three-day rally. A few beaten tech stocks that could be snapped up are Block (ASX:SQ2), Appen (ASX:APN) and Nearmap (ASX:NEA), these stocks are trading below their historical averages.

In AGMs, Eagers Automotive (ASX:APE) has their annual Meeting after doubling full year net income in their February update. Telix Pharmaceuticals (ASX:TLX) is also on the docket.

AGL Energy (ASX:AGL) after JP Morgan organised a block trade for Mike Cannon Brookes for $467 million, according to the AFR.

Analysts are talking about the price of iron ore dropping under US$100. Here is an interesting graph which shows the price declining when there is a Beijing push. Keep an eye out for BHP (ASX:BHP) and Rio Tinto (ASX:RIO).

Fortescue Group (ASX:FMG) on news that Andrew Forrest will be appointed executive chairman , specifically overseeing the iron ore business for an interim period to help drive the company’s transition when Elizabeth Gaines concludes her highly successful tenure in August. 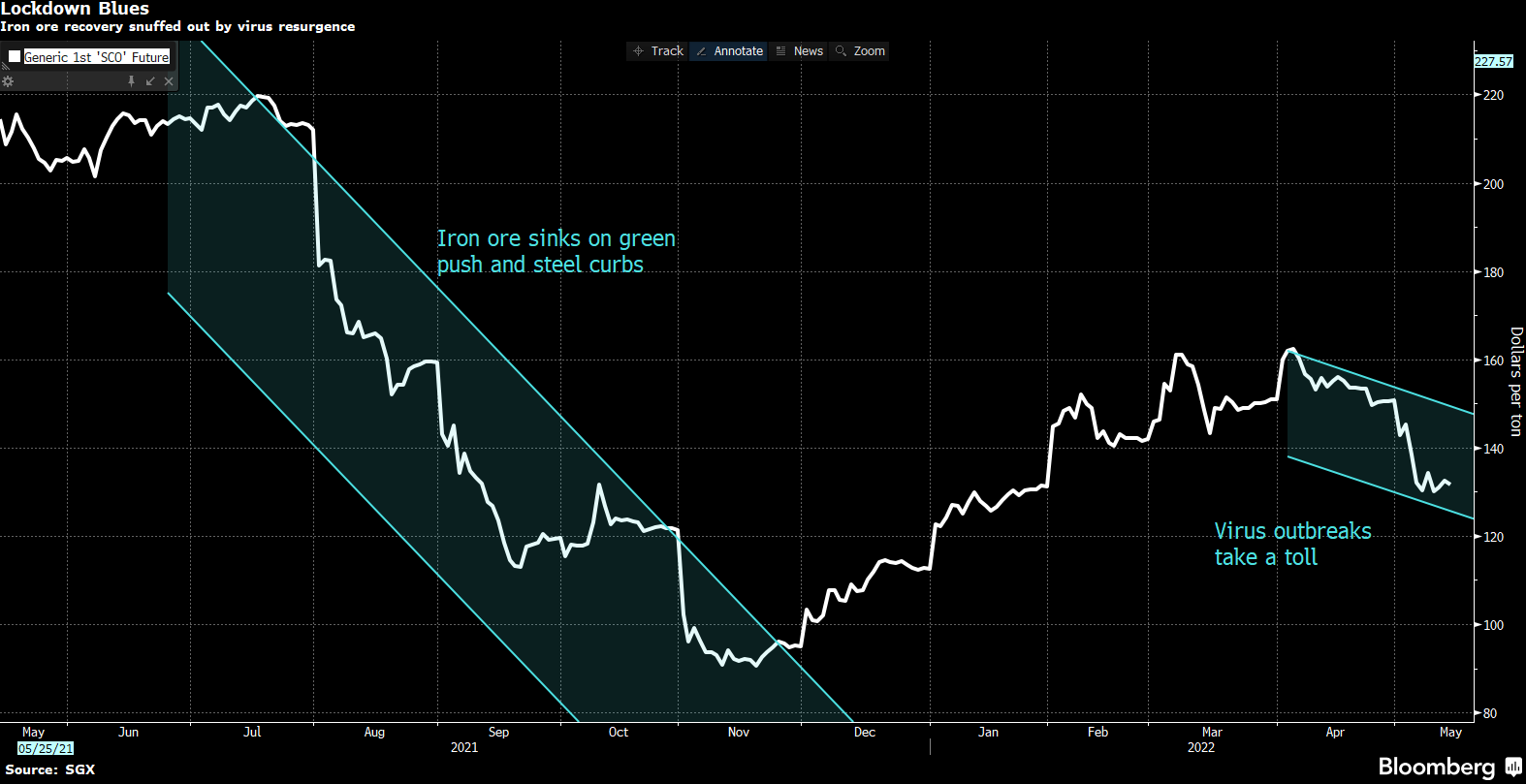