Wall St lacked conviction after learning that China’s extended lockdowns could ease, sending oil prices higher while they digested a raft of economic print, including the April retail sales data.

Our next investor event is on next Tuesday 24 May, at 12.30 AEST with Shaw & Partner’s market strategist Martin Crabb, and six CEOs presenting. Make your way to fnn.com.au to register for your free online spot.

Good morning. I’m Melissa Darmawan for Finance News. This is your market outlook.

The Australian sharemarket is set to consolidate after a choppy session in the US.

Wall St closed mixed as investors try to interpret the outlook after digesting China’s latest economic data, following last week’s losses as the S&P 500 avoided a bear market, denting market sentiment of fears of a possible recession. The next focus is the retail sales data this week to see how the consumer is holding up as prices remain at its highest levels in 40 years.

Across the S&P 500 sectors, energy extended its gains as the best performer, up 2.6 per cent. Interestingly, we had defensive sectors rally, healthcare, consumer staples and utilities. The rest closed lower with industrials shedding the least by 0.2 per cent.

Amid this uncertainty, investors bought into gold and bonds as the yield on the 10-year treasury note fell by 5 basis points to 2.89 per cent while the greenback weakened.

Firstly, it’s the same story, different day. The uncertainties continue to persist with the war in Ukraine and what it means for inflation.

Added to the mix is the latest reading in retail and factory figures in China which showed a slump in April due to the extended Covid-19 lockdowns. China’s retail trade declined by 11.1 per cent year-on-year, worse than market expectations of a 6.1 per cent fall and after a 3.5 per cent drop in the prior period as per the National Bureau of Statistics of China.

Despite the number of cases, its zero-Covid policy has shut down cities with more than 20 million people, impacting the already strained global supply chain and pressing down on consumer sentiment.

Analysts say that the downturn in China’s recent health of the economy is a big signal. Why? It means that the world’s largest trading partner will have difficulty ramping up exports, contributing to higher prices in an already hot inflationary environment. This is a headwind for our Aussie dollar as China is our largest trading partner.

Economic figures suggest stagflation which is high inflation, and slowdown in growth. However, to meet the 1970s technical definition, we would need to see high unemployment which is actually the opposite right now.

Then you compound this on the crypto crash last week and the possibility of a contagion, so a sell-off in other asset classes like equities, and you can see why investors are figuring out what to do, how to hedge their position, or book what profits are left in this volatile market.

As we have chatted several times before, investment fundamentals like your time horizon, dollar cost averaging etc plays a role. The bulls outperform the bears over the long term as per the graphs we have seen lately.

Elsewhere, wheat futures climbed after India announced an immediate ban to export this critical commodity in a move to guarantee India’s food security.

Wheat prices are 46 per cent higher than before the Russian invasion. Before the war, Ukraine and Russia were responsible for 30 per cent of world exports, according to Trading Economics. 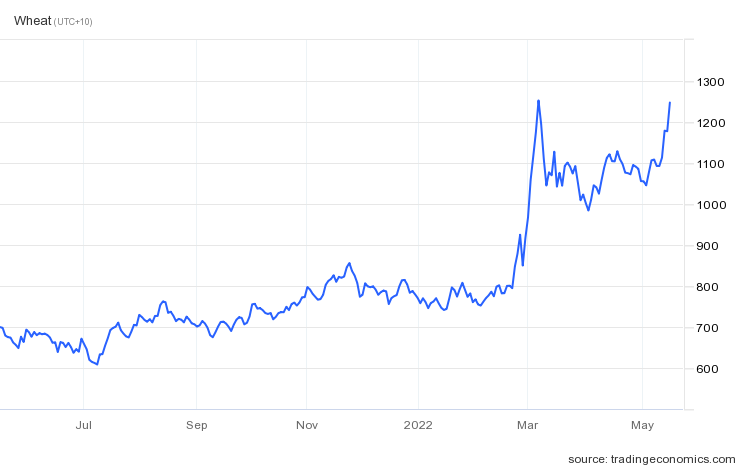 The concern here is the availability for food, soaring prices for food and how long it could take to stock up the shelves amid further shortages.

As large as Russia’s involvement is with oil, the role of fertiliser is also one to watch amid this.

Join me here for “Sector Watch: Australian fertiliser stocks – Who are the potash players?” to find out what this means.

On the London Stock Exchange, Rio added 0.4 per cent, BP gained 0.9 per cent and Shell jumped 1.5 per cent.

Yesterday, the Australian sharemarket closed 0.3 per cent higher at 7,093.

Taking all of this into the equation, the SPI futures are pointing to a 0.3 per cent gain.

The latest RBA meeting minutes are due at 11.30am. Market participants will be combing through the statement to find any colour around the size and timing of the next rate hike. The weekly consumer sentiment report from ANZ and Roy Morgan are due.

In earnings, James Hardie (ASX:JHX) is on the docket. Their Bloomberg consensus for their adjusted net operating profit estimate is $182.8 million. United Malt (ASX:UMG) is also due to report with underlying EBITDA to come in at $57 million.

In broker moves, Goldman Sachs raised Bluescope Steel (ASX:BSL) to buy from neutral but cut Sims to neutral from buy. Jefferies upgraded Computershare (ASX:CPU) to new buy with a price target of $29.50 while cut Incitec Pivot’s (ASX:IPL) rating to hold from a buy.

CVC could potentially be walking away from the Brambles (ASX:BXB) offer.

Graincorp (ASX:GNC) amid the news from India that we’ve discussed.

The Aussie dollar, it will be interesting to see if we can see it push higher from a 69 handle to 70 amid the release of the RBA statement.

Our weekly stock to watch this week is REA Group (ASX:REA). David Thang, Senior Private Wealth Adviser at Sequoia (ASX:SEQ) rates REA Group as a buy. From a technical angle, REA Group is worth consideration.

Since printing a high of $180.67 in November 2021, the share price of REA Group has been sold-off to the tone of 42.23 per cent over a six month period. Positively, a region of support was respected at the $107 mark in early May.

This is made up of the 61.8 per cent Fibonacci retracement as shown by the horizontal green line and congestion points in both July and September 2020, as illustrated by the yellow circles. Though the trend is clearly downwards at this stage, a long-term investor could commence building a long position at current levels.

If sentiment improves over the months ahead, then an eventual drive towards the $133.52 and $135.25 zone (light blue box) could potentially be on the cards. These price levels are made up of the 38.2 and 78.6 per cent Fibonacci retracement levels respectively. 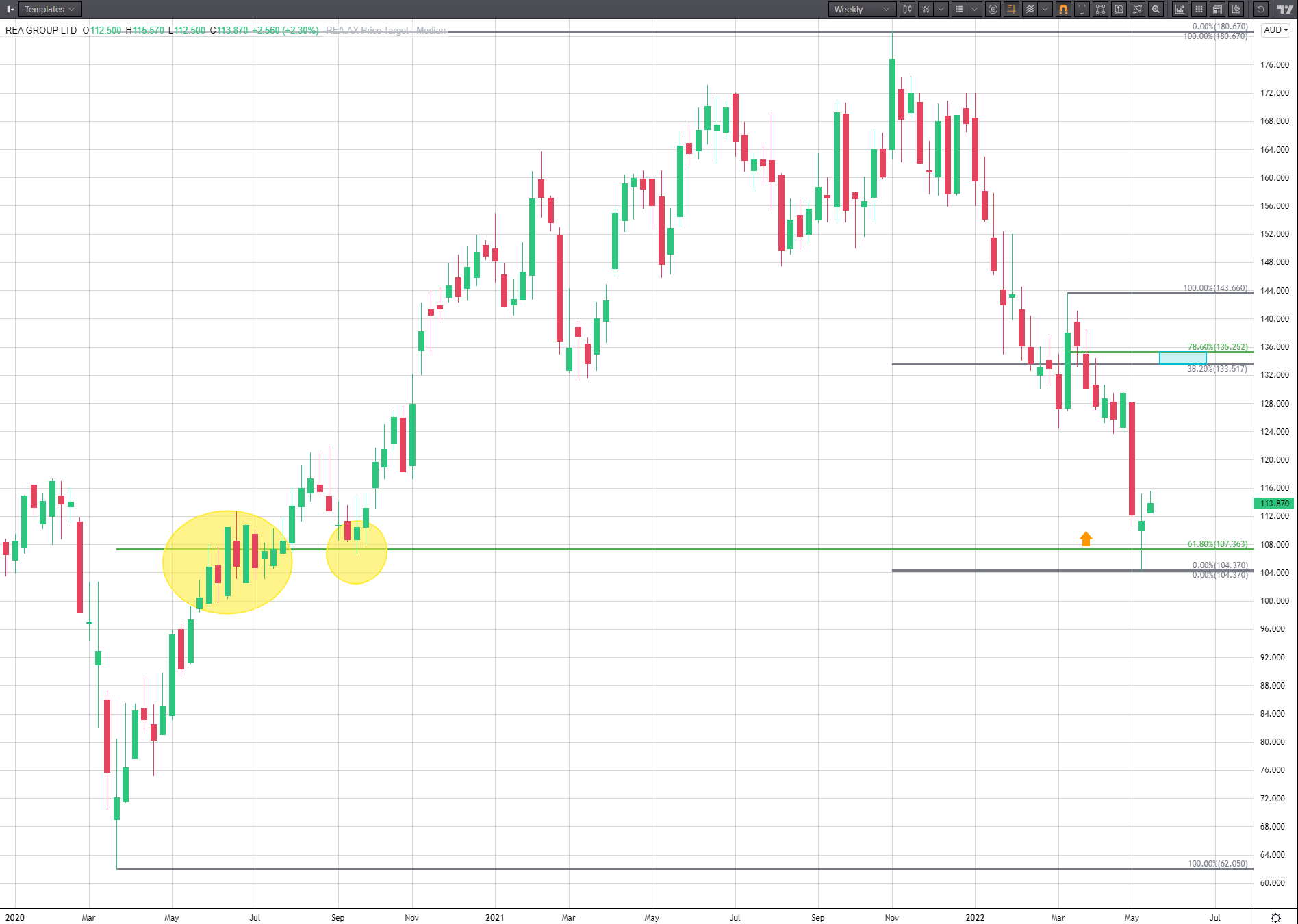 There is one company set to pay eligible shareholders today