Dow closed lower as Wall St falls to March 2020 levels. Iron ore prices eased against poor demand sentiment and weak steel margins. Oil prices slumped to a four-week low on concerns that central bank interest rate hikes could crimp global demand. What to look out for on the ASX today.

Good morning. I’m Melissa Darmawan for Finance News.  What a messy few weeks it has been on the markets. I hope you had a good weekend. This is your market outlook.

The Australian sharemarket is set to fall after a wild week, globally.

US stocks mixed on Friday, down for week again

Wall St saw a mixed day on Friday but finished the week with sharp losses of five to six per cent, bonds didn’t fare so badly, considering the Fed news, with the yield on the 10-year, up seven basis points, ending the week at 3.23 per cent.

Other than the news from the Fed around its 75 basis point hike, it was the Friday of the quarter when the perfect storm loomed over investors: the triple witching.

On the third Friday of every March, June, September and December, three key events come together to add volatility on the current oversold conditions. That means that there would be an accelerated selling pressure, not that we need more of it.

Also during triple witching, index rebalancing takes place. This means that the market can see about five to six times the amount of trading volume and it can really push a single stock move in one direction or the other. 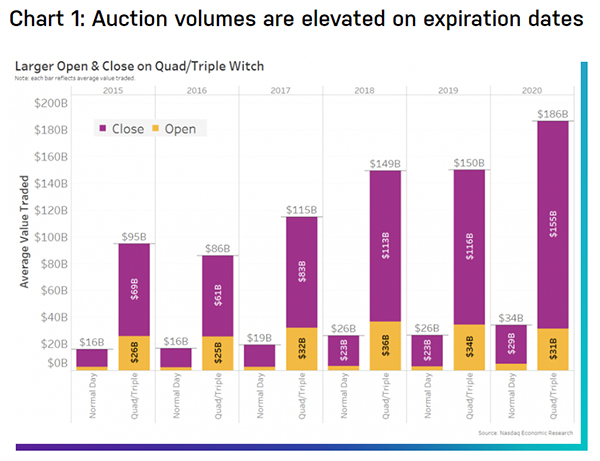 The point to note is that this is not a one day activity – anticipate flat to high volumes to continue when Wall St reopens from their three day long weekend.

Target made headlines three weeks ago with their second profit downgrade. While some companies have already buckled, like Revlon. The share price soared 91.3 per cent to US$3.73. The company has struggled to deal with its mountain of debt valued at US$3.8 billion. The free money train is coming to an end as interest rates take a U-turn in its biggest jump since 1994 in the US.

We have been at record low interest rates for some time, but there are also other factors at play other than interest rates, such as the strained supply chain and the war in Ukraine.

With Revlon, the 90-year old cosmetic giant has had its Kodak moment and failed to keep up with its younger, hipper rivals, whilst extending debt to unsustainable levels. It was the supply-chain issues that broke the camel’s back as logistical issues to meet customer demand hampered the company’s ability to pay their debt. Adding further colour to the situation, rising prices on key ingredients and labour shortages didn’t help.

There are also other early signs of stress with junk bond yields, jumping significantly. This may be a sign of further problems to come.

However amid this, if earnings forecasts will have to come down – the S&P 500, which trades at 15.4 times 12-month forward earnings, isn’t nearly as cheap as it looks, according to Goldman Sachs that if S&P 500 companies earn US$239 and trade at 17 times, the index would trade at 4,165, up 13 per cent from Friday’s close. That’s the optimistic case.

But if 2023 earnings come in lower—say, at $225—and the price/earnings ratio slips to 14, the index could trade down to 3150, off 14 per cent from Friday’s close. “Investors looking for value opportunities should consider both valuations and potential downside risk to earnings estimates”.

Oil fell the most in three months as recession fears were renewed, sending the greenback higher and also the energy sector lower by 5.6 per cent as the worst performer on the S&P 500. 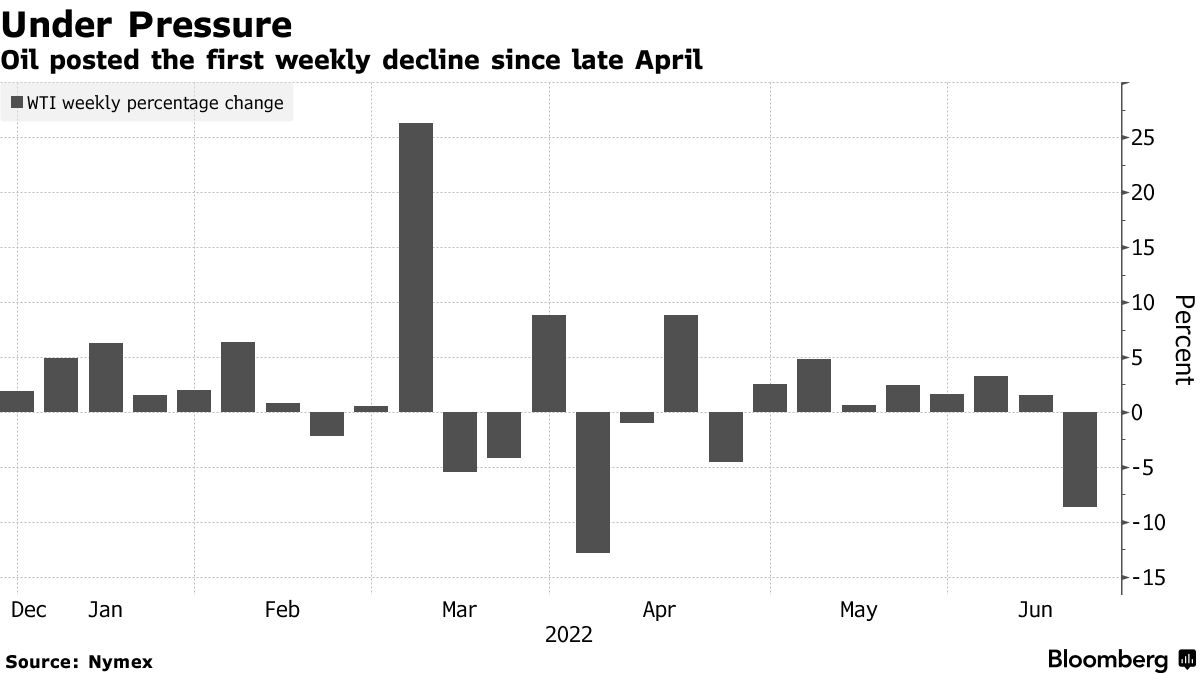 Mr Powell has reiterated that the Fed is focused on returning inflation to its 2 per cent target. Some economists take this as a sign that a recession is inevitable as the central bank places curbing inflation over economic growth, this could see energy consumption drop.

Bitcoin dips below US$20k before recovering

Elsewhere, Bitcoin plunged to the lowest since late 2020, before recovering some of its losses. The largest digital token by market value tumbled as much as 15 per cent to US$17,599 yesterday, marking a record-breaking 12th straight daily decline.

European markets closed mixed amid inflation in the Eurozone, rising to a record high of 8.1 per cent in May. Paris fell 0.1 per cent, Frankfurt added 0.7 per cent, while London’s FTSE closed 0.4 per cent lower, weighed down by BP fell 6.2 per cent and Shell by 5.3 per cent.

On Friday, the Australian sharemarket fell 1.8 per cent to 6,475, extending its losing streak to a sixth straight day to notch its worst week since March 2020. Consumer staples sector closed higher while the other sectors fell led by materials and information technology. Over the week, it closed 7.1 per cent or 457 points lower.

Taking all of this into the equation, the SPI futures are pointing to 0.3 per cent fall.

As investors search for safety, the defensive appeal of the consumer staples and gold miners could be in the spotlight today.

Airbus and Qantas (ASX:QAN) are set to invest up to $200 million to accelerate the establishment of a sustainable aviation fuel (SAF) industry on home soil. Due to the lack of a local commercial-scale sustainable aviation fuel industry, Australia is currently exporting millions of tonnes of feedstock every year, such as canola and animal tallow to be made into SAF in other countries. The partnership will provide funding for locally developed and produced SAF and feedstock initiatives.

Travel stocks in the US, Carnival and Norwegian Cruise Line rebounded, soaring around 10 per cent each. Qantas, Flight Centre (ASX:FLT), Webjet (ASX:WEB), REX (ASX:REX) could take-off if this is a strong lead.

In a period of high inflation, rising interest rates and growing concerns around economic growth, food production and wine stocks could be on the move. Keep an eye out for Australian Agriculture (ASX:AAC), Costa Group (ASX:CGC), Treasury Wine Estate (ASX:TWE).

Energy stocks could be under a bit of pressure such as Woodside Energy (ASX:WDS), Santos (ASX:STO).

New York-based buyout fund Blackstone has emerged as a suitor for the data sourcing company Appen (ASX:APN), which was briefly subject to a $1.2 billion buyout proposal from a strategic suitor before they walked away, according to The Australian.

No economic news locally, however China loan prime rates are due today.

Iron ore futures point to a 5.6 per cent fall.