The Australian sharemarket is set to retreat with the SPI futures pointing to a fall of 0.9 per cent.

A rocky start to the first full week of the final quarter, as mega cap technology names fell while bond yields rose.

The moves followed the recent sell off in big tech names as investors monitor the inflation story. Rising bond yields squeeze the future profit outlook of these debt-heavy companies.

Facebook fell 4.9 per cent after the Instagram outage while Microsoft, Apple, and Amazon fell over 2 per cent.

Crowding investors’ minds is President Biden’s US$3.5 trillion package, which could now fall to US$1.9 to $2.3 trillion amid confirmation that China’s trade tariffs remained unchanged. Meanwhile, the debt ceiling continues to be unresolved while supply chain disruptions continue.

The yield on the 10-year treasury note rose by 2 basis points to a near 1.48 per cent as gold rose, on a weaker greenback.

Asian markets closed lower on recent moves by Evergrande and in Japan.

Tokyo’s Nikkei lost 1.1 per cent after the country’s new premier called a snap election for 31 October.

Hong Kong’s Hang Seng tumbled 2.2 per cent after Evergrande requested a trading suspension. They announced “a possible general offer for shares of the company” worth about $7 billion.

ASX 200 takes off on flight and bank stocks

Yesterday, the Australian sharemarket closed 1.3 per cent higher at 7,279, a rally in travel and bank stocks led a vibrant session on a low volume day.

The local bourse leapt 1.4 per cent at the opening bell until investors digested the news from Evergrande, leading to a mild pullback by lunchtime. Shrugging off the concerns, investors continued to pile back into bank stocks as the XJO clawed back its losses from September.

A 5.1 per cent rise in Commonwealth Bank (ASX:CBA) underpinned the rally as the nation’s largest bank completed its $6 billion off-market buyback. It was heavily oversubscribed by $18 billion. The other major banks rode on the coattails making financials as the best performing sector up 2.6 per cent, followed by consumer discretionary adding 1.7 per cent then property.

The best performing stock in the ASX200 was Flight Centre Travel (ASX:FLT) closing 9.6 per cent higher at $23.95, followed by IDP Education (ASX:IEL) and Alumina (ASX:AWC.

The worst performing stock was Sealink Travel (ASX:SLK), down 5.4 per cent at $8.30 followed by Redbubble (ASX:RBL) and Kogan (ASX:KGN).

In company news, Boral (ASX:BLD) soared 4.2 per cent to $6.22 on news they are slated to return up to $3 billion in capital to shareholders. The moves follow the near conclusion of an asset sale program, consisted of leaving two North American businesses.

Nick Scali (ASX:NCK) jumped 10.4 per cent to $12.12 as they are set to acquire sofa retailer, Plush from Freedom Furniture owner Greenlit Brands. The deal comes with a price tag of $103 million, and is set to almost double Nick Scali’s store footprint in the near term.

Shares in concrete, and earthworks testing company Intega (ASX:ITG) galloped 52.6 per cent to 87 cents. The company received a 90 cents-per-share takeover bid from Netherlands-based Kiwa boosting the enterprise value to $421 million.

Today the Reserve Bank board is set to meet with expectations that there will be no change to monetary policy.

RBA Governor Lowe is slated to provide an update on the economic outlook, following the recent job numbers which fell due to Covid-19 related lockdowns. Retail sales declined for the third month.

This meeting follows the moves from last week, after Fed Chair Powell acknowledged that high inflation is persisting, longer than they anticipated.
On the economic data front, ANZ and Roy Morgan will release their weekly consumer confidence.

AiGroup is set to release the performance of construction index.

The Australian Bureau of Statistics has pencilled in the international trade in goods and services for August.

Since printing a high of $17.03 in November 2020, sellers have dominated the price action for the past eleven months. Positively, a support zone located between $7.96 and $8.32 has resulted in buyers to have stepped up to the plate in late September, as marked by the orange rectangle and arrow. This layer of support is made up of December 2018, January 2019 and April 2019 low, in combination with the 61.8 per cent Fibonacci retracement level.

Upward momentum is beginning to unravel, therefore increasing the probability of a rotational move north. Should this bullish case evolve, then this could mark the slow-down of the current downtrend.

Lastly, with reference to the Williams %R momentum oscillator on the lower pane as shown by the purple line. This indicator has moved higher from oversold territory, which signals a strengthening of near term upward momentum. 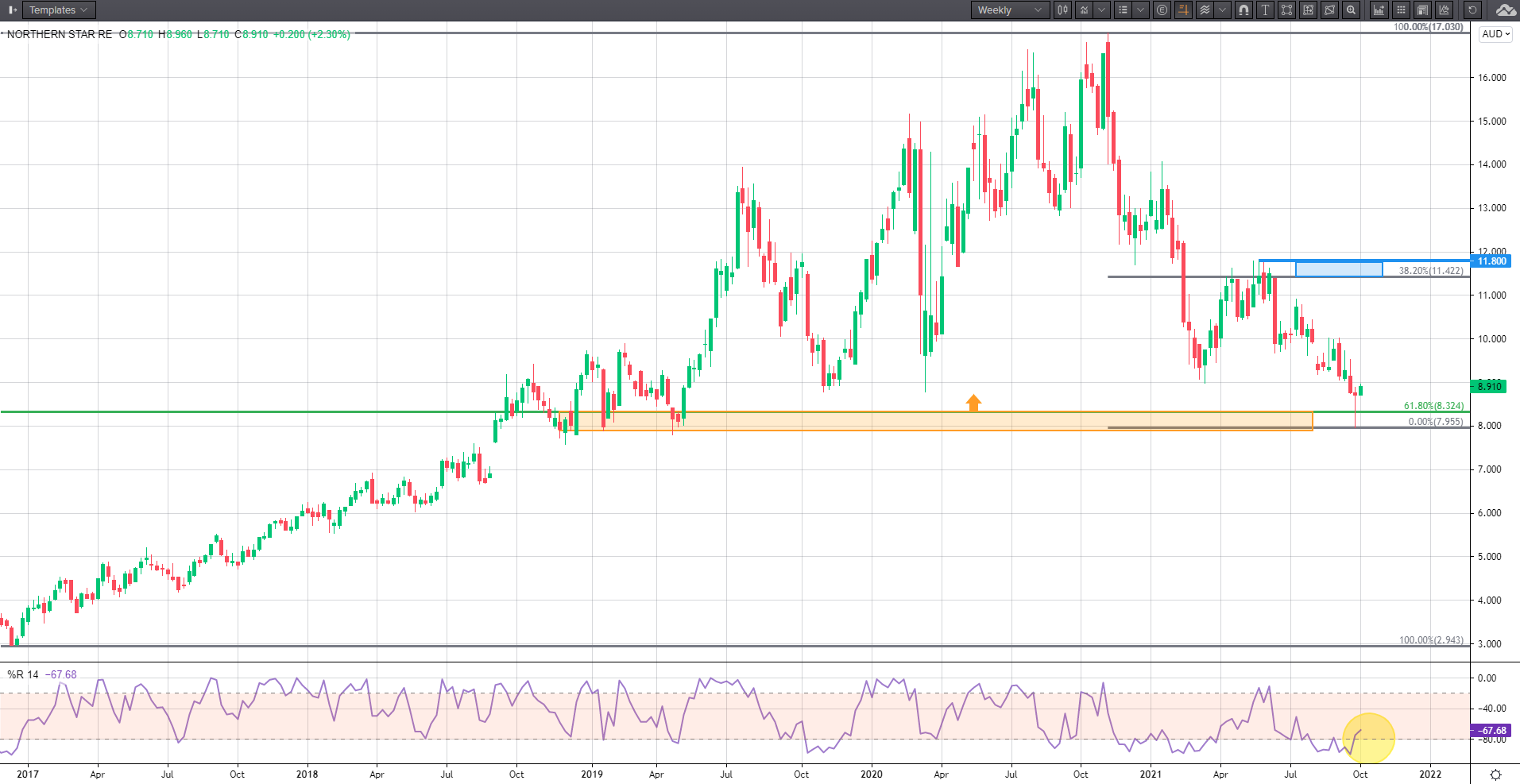 There are six companies set to trade ex-dividend today.

There are 10 companies slated to pay eligible dividends to shareholders.

There are three companies slated to have their AGMs today.

Oil was up $1.74 or 2.3 per cent to US$77.62 a barrel after OPEC+ agreed to maintain output increases at 400,000 barrels per day, each month. The moves come despite a surge in demand due to the energy crisis we are seeing.