The Australian sharemarket is set to lift with the SPI futures pointing to a gain of 0.2 per cent.

Wall St started the month with the major indexes hitting a record high ahead of the Federal Reserve’s meeting this week. Investors were trading with caution earlier where we did see a mixed market over inflation concerns.

Market participants are expecting a formal announcement on its tapering of its asset purchases program. This support has helped the economy accelerate on the stimulus that was made available.

In the backdrop, there are a number of central banks set to meet with hawkish decisions looming. Our Reserve Bank is set to meet today, while on the docket, the Bank of England as well as the Czech central bank will also convene this week.

The recovery from the pandemic has been making its way back, as we have seen from the economies around the globe. The question is if rising interest rates will be any hindrance to the momentum.

The RBA could tighten policy after the central bank didn’t step in last Friday to control the yield movement. It left market participants wondering if the RBA will drop the yield curve control or raise interest rates.

If we go to the Federal Reserve, market participants are prepared for the tapering, it’s just more a matter of when. Now it’s about how many rate hikes to expect.

Elsewhere, U.S. factory activity slowed in October as new orders fell to a 16-month low. Factories have continued to experience delays to receive raw materials and find parts. The Institute for Supply Management reading slipped to 60.8 last month from 61.1 in September, but came in above expectations. The supply chain disruptions and labour shortages could weigh further on the recovery into the coming year.

Aluminium tariffs goes from Harley products on EU & US deal

Meanwhile, Harley Davidson shares soared 9.1 per cent after the US and European Union reached an agreement on steel and aluminium tariffs. Following years of dispute, the deal is set to remove tariffs on Harley products. The announcement was made during G20 summit by President Biden.

Amid the company earnings season and stocks notching new record highs, the resilience of the markets will be on watch as market participants face a period of looming interest rate hikes. It’s time to be prepared for a volatile month.

Across the S&P 500 sectors, communication services fell 0.7 per cent followed by healthcare and technology as the losers. The rest closed in the black with energy sector as the best performer, up 1.6 per cent.

The yield on the 10-year treasury note dipped one basis point to 1.56 per cent as gold strengthens on a weaker greenback.

Across the Atlantic, European markets closed higher as household names like Rolls-Royce and Lloyds gave investors something to cheer about.

A mixed performance across the mining and oil giants. BHP fell 0.6 per cent, Rio closed flat, BP advanced 1.9 per cent while Shell dropped 0.8 per cent.

Tokyo’s Nikkei surged 2.6 per cent after investors had a day to celebrate the win. The Liberal Democratic Party won a solo majority of the votes in the election on Sunday. This raised the prospects of a stronger government and more stimulus measures to support the businesses hit by the pandemic.

ASX 200 jumps back as M&As emerges

Yesterday, the Australian sharemarket closed 0.6 per cent higher at 7,371 emerging out of the red sea we saw at the end of last week. The local bourse tipped rose with gains almost across the board except financials, with Westpac pushing the sector down.

Westpac shares (ASX:WBC) tumbled after the nation’s oldest bank’s 2021’s financial year results missed expectations as the cost of margin pressure weighed. An off-market share buyback of up to $3.5 billion followed the moves from its peers, though it wasn’t enough to arrest the decline plunging over 7.0 per cent.

Meanwhile, the merger and acquisition fever boosted the index. AusNet (ASX:AST) agreed to back Brookfield’s takeover bid after the Canadian asset manager increased its all-cash offer by 15 cents to $2.65. Shares jumped 3.6 per cent to $2.56.

Seven West Media (ASX:SWM) inked a deal to acquire Prime Media (ASX:PRT) for $121.9 million. The offer represents a 57 per cent premium to Prime’s closing price on Friday. Seven’s share price rose 1.8 per cent to $21.92 while shares in Prime skyrocketed 73.9 per cent to $0.40.
The best-performing stock in the S&P/ASX 200 was Orocobre (ASX:ORE), closing 5.8 per cent higher at $9.42. It was followed by shares in Blackmores (ASX:BKL) and WiseTech Global (ASX:WTC).

The worst-performing stock in the S&P/ASX 200 was Westpac Banking Corporation (ASX:WBC), closing 7.4 per cent lower at $23.78. It was followed by shares in ResMed (ASX:RMD) erasing its losses from Friday and St Barbara (ASX:SBM).

Today the Reserve Bank board is slated to meet with all eyes on any commentary around inflation, bond purchases program, the jobs market and the economy. Market participants are expecting that governor Philip Lowe will announce the retirement of the yield curve control policy.

Our weekly stock to watch this week is Appen (ASX:APX). David Thang, Senior Private Wealth Adviser at Sequoia (ASX:SEQ) rates Appen as a buy. From a technical angle, Appen is bullish for a number of reasons. Since printing a high of $43.66 in August 2020, the bears have dominated the price action resulting in the circa 81 per cent decline in share price. Positively, a zone of support located between $8.09 and $8.88 has resulted in the bulls to have stepped up to the plate in October, as marked by the orange rectangle and arrow. This foundation of support is made up of the 127.2 per cent Fibonacci extension (orange horizontal line) and structural support (horizontal dotted black line) respectively. Furthermore, a bullish engulfing candle formed at the end of October, which is suggestive of an interim low in place.

Lastly, the MFI ‘money flow index’, which measures the inflow and outflow of money into an asset over a certain time period, by taking into account both price and volume. This oscillator has risen from oversold territory (purple line on the lower pane) signalling momentum to have rotated to the upside. Above, an eventual gravitation towards the $15.70 to $16.00 region could potentially be on the horizon over the broader term. 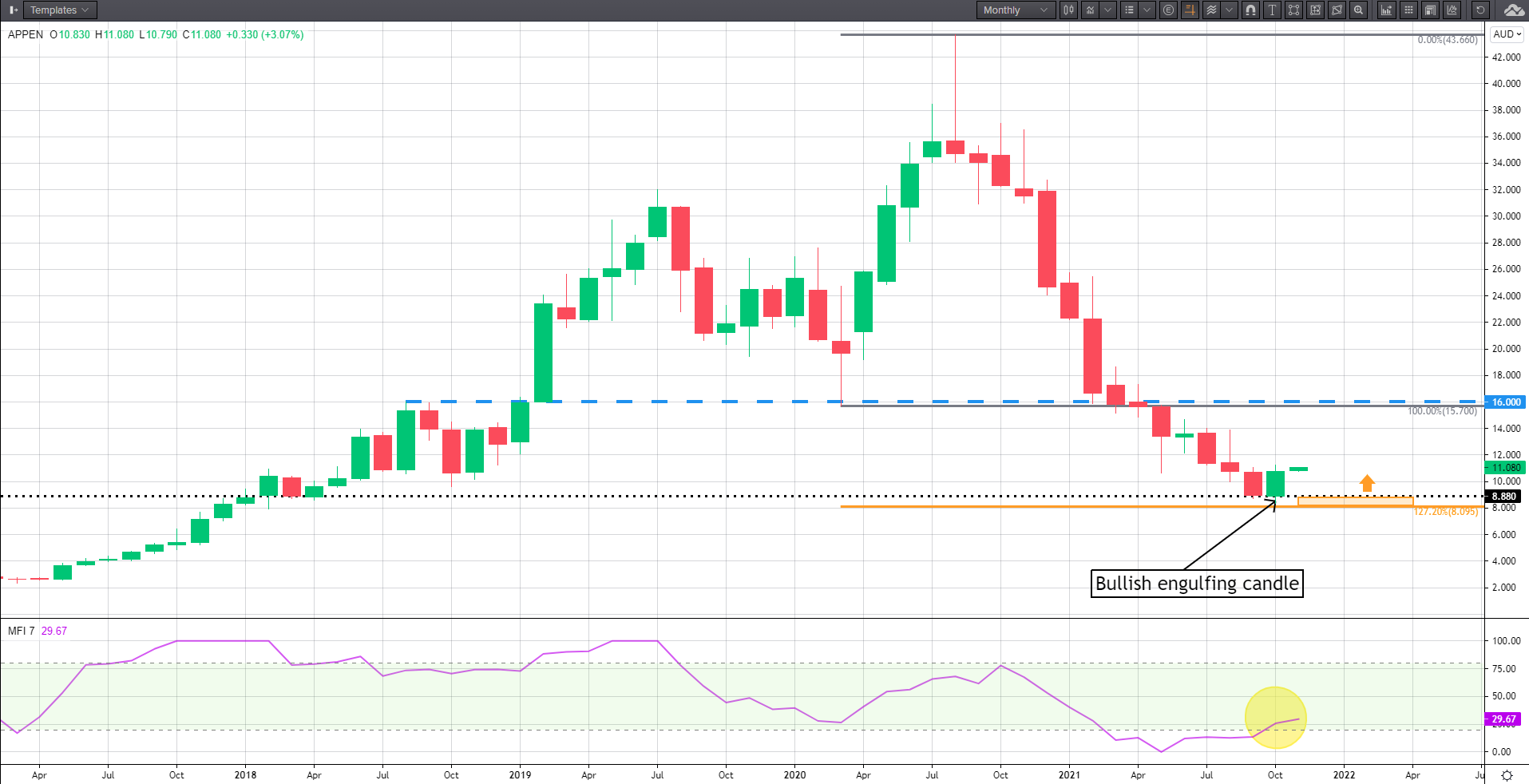 There are eight companies are set to deliver their annual reports today.

There are two companies slated to make their debut on the ASX today. Keep an eye out for Aurum Resources (ASX:AUE) and RemSense Technologies (ASX:REM). They are a virtual plant and technology and engineering services.