US & European stocks rallied as Omicron worries subsided. Asian markets fell as Evergande angst builds despite the PBoC moves to support the economy. The ASX eked out a gain on a tech slump. Omni Bridgeway (ASX:OBL) rated as bullish for Stockwatch. RBA to meet today.

The Australian sharemarket is set to open higher with the SPI futures pointing to a gain of 0.4 per cent.

US stocks rallied as worries about the Omicron variant started to recede. In the past week, we have seen the major indexes go through swings of losses to gains. The uncertainty of this new strain and its impact to hamper economic recovery looms as market participants wait for more data. Dr Anthony Fauci calmed investors as he said that initial data was “a bit encouraging”, however it’s still too early if Omicron is less deadly than delta. Despite this, stocks were in rally mode ahead of the Federal Reserve’s meeting next week.

Meanwhile, oil prices rose on hopes of boosted demand amid news that Saudi Aramco is set to raise its selling prices for all grades of crude into Asia for January. The reports gave energy traders a short term confidence boost amid the Omicron uncertainty. However, it is questionable if this rally will continue as the upper hand is actually the coronavirus and its risks to the economy. Amid this, is the US to release oil from reserves in a coordinated approach with other countries, but one thing we need to remember, OPEC+ has the upper hand.

Across the S&P 500, every sector advanced. Travel stocks rose offsetting declines in vaccine makers lifting the industrials sector higher as the best performer adding 1.7 per cent, energy sector fared well as second best sector followed by materials. Healthcare added the least by 0.5 per cent with information technology shares adding over 1.0 per cent.

The yield on the 10-year treasury note rose 9 basis points to 1.43 per cent. Gold dipped on a weaker greenback.

Across the Atlantic, European markets closed higher amid Eurozone consumer confidence fell to the lowest since last April as tighter lockdown measures weighed on sentiment. The investor confidence index fell to 13.5 in December from 18.3 in the previous month. Investors also digested German’s factory orders dropped 6.9 per cent in the month for October below expectations.

Asian markets closed lower ??amid a default looming by Evergrande overshadowed by China’s central bank saying that they would lower the amount of funds banks would need to have set aside as reserves. A move that would help increase liquidity into the financial system and reduce financing costs for businesses in a bid to support the economy. Shares in embattled Evergrande sank almost 20 per cent.

Tokyo’s Nikkei fell 0.4 per cent, Hong Kong’s Hang Seng lost 1.8 per cent dragged down by a 5.6 per cent tumble by Alibaba and fall of 3.2 per cent by Tencent amid Didi’s intent to delist from Wall St and move to Hong Kong, while China’s Shanghai Composite closed 0.5 per cent lower.

Yesterday, the Australian sharemarket closed 0.1 per cent higher at 7,245 after a choppy session. The kick off saw the local bourse trade as low 0.4 per cent then as high of 0.1 per cent in the morning with quite a bit of bumpiness between buying and selling till we saw a late afternoon rally to tip its nose over the finishing line.

Outside the tech sector being the worst performing sector diving 2.2 per cent, communication services, materials, and healthcare also closed lower. Utilities was the best performer, lifted higher by APA (ASX:APA) surging 4.4 per cent at $9.85, followed by consumer staples thanks to Coles (ASX:COL) and Woolworths (ASX:WOW) rising 2.7 per cent and 2.6 per cent respectively. Energy stocks also rallied advancing 0.6 per cent despite the oil price softening overnight.

Across the major lenders, Commonwealth Bank (ASX:CBA) added 0.7 per cent, National Australia Bank (ASX:NAB) rose 0.3 per cent, Westpac (ASX:WBC) edged higher by 0.1 per cent while ANZ Bank (ASX:ASX) eked out a gain of 0.04 per cent.

The wealth platform space also got a hit with HUB24 (ASX:HUB) fell 4.4 per cent, while Netwealth (ASX:NWL) closed 1.7 per cent lower.

Mining giants fell with Rio Tinto (ASX:RIO) leading the fall, down 1.8 per cent, followed by BHP (ASX:BHP) by 1.6 per cent. Fortescue Metals (ASX:FMG) bucked the trend adding 0.3 per cent.

The best-performing stock in the S&P/ASX 200 was Metcash (ASX:MTS) closing 7.3 per cent higher at $4.24, followed by shares in Silver Lake Resources (ASX:SLR), and APA Group (ASX:APA).

In M&A news, Boral (ASX:BLD) added 1.6 per cent after the building products manufacturer inked a deal to divest its North American fly ash business to Eco Material Technologies for $1.1 billion (US$775 million), The company is backed by US private equity investors One Equity Partners and Quadrant Management. Boral hasn’t determined how to return surplus capital from the sale to shareholders after allowing for reinvestment requirements. The sale is slated to be complete in the financial year 2022 to allow for regulatory approval.

Metcash (ASX:MTS) impressed investors with their first-half financial year 2022 results that came in better than expected. The owner of IGA and Mitre 10 posted a 31 per cent increase in the first half dividend, bringing it to 10.5 cents per share. They posted a 3.0 per cent jump in net profit after tax at $128.8 million with group revenue rose 1.3 per cent at $7.2 billion. Metcash flagged the strong trading momentum that had continued into the first five weeks of the second half of financial year 2022, with food, liquor and hardware sales all up on the year-ago period. Shares lifted off 7.3 per cent higher at $4.24.

Bapcor (ASX:BAP) tumbled 5.6 per cent at $6.41 after the car parts supplier brought forward the chief executive officer Darryl Abotomey to step down from February next year to effectively immediately citing a “marked deterioration in the relationship between the board and the CEO”.

Sigma Healthcare (ASX:SIG) sank 7.6 per cent at $0.485 after the owner of pharmacy brands Amcal and Guardian downgraded its guidance for financial year 2022 operating earnings to a contraction of 10 per cent from a reduction of 5.0 per cent previously. The downgrade was attributed to operational issues following the implementation of new systems, applications and products software with the impact on sales to continue into the financial year 2023 year.

To close off the day, the Reserve Bank is slated to convene at 2.30 AEDT for their final meeting this year. It is expected that the RBA will keep policy unchanged after scrapping the yield curve target last month. Economists are expecting the cash rate to stay at 0.1 per cent, and quantitative easing is to be reviewed at the next meeting in February next year to be continued at $4 billion per week.

It will be interesting to see how the Aussie dollar performs today after its decline towards the 70 cents mark. Given that it is expected that there will be no change, I wouldn’t be surprised if it remains steady today after the bounce around in the recent meetings. This might change if the central bank does pivot in a hawkish manner.

Magellan’s chief executive officer Dr Brett Cairns is slated to step down due to personal reasons. Chief financial officer Kirsten Morton will step in for the meantime. Shares in Magellan Financial Group (ASX:MFG) closed almost 4.0 per cent lower at $31.08 yesterday.

Since printing a high of $5.38 in June 2020, the bears dominated the price action, which resulted in the circa 51 per cent decline in share price over a 17 month period. Positively, a zone of support between $2.62 and $2.88 was tested in November, as marked by the orange rectangle and arrow. Positively, a bullish hammer has formed, signalling an exhaustion of selling pressure. Should this gain traction, then a broader advance towards a band of resistance indicated between $4.01 (50 per cent Fibonacci retracement) and $4.34 (61.8 per cent Fibonacci retracement) could likely be on the cards.

Lastly, the MFI ‘money flow index’, which measures the inflow and outflow of money into an asset over a certain time period, by taking into account both price and volume. This oscillator has risen from oversold territory (purple line on the lower pane) signalling momentum to have shifted in favour of buyers. Shares in Omni Bridgeway (ASX:OBL) closed 3.1 per cent lower at $3.13 yesterday. 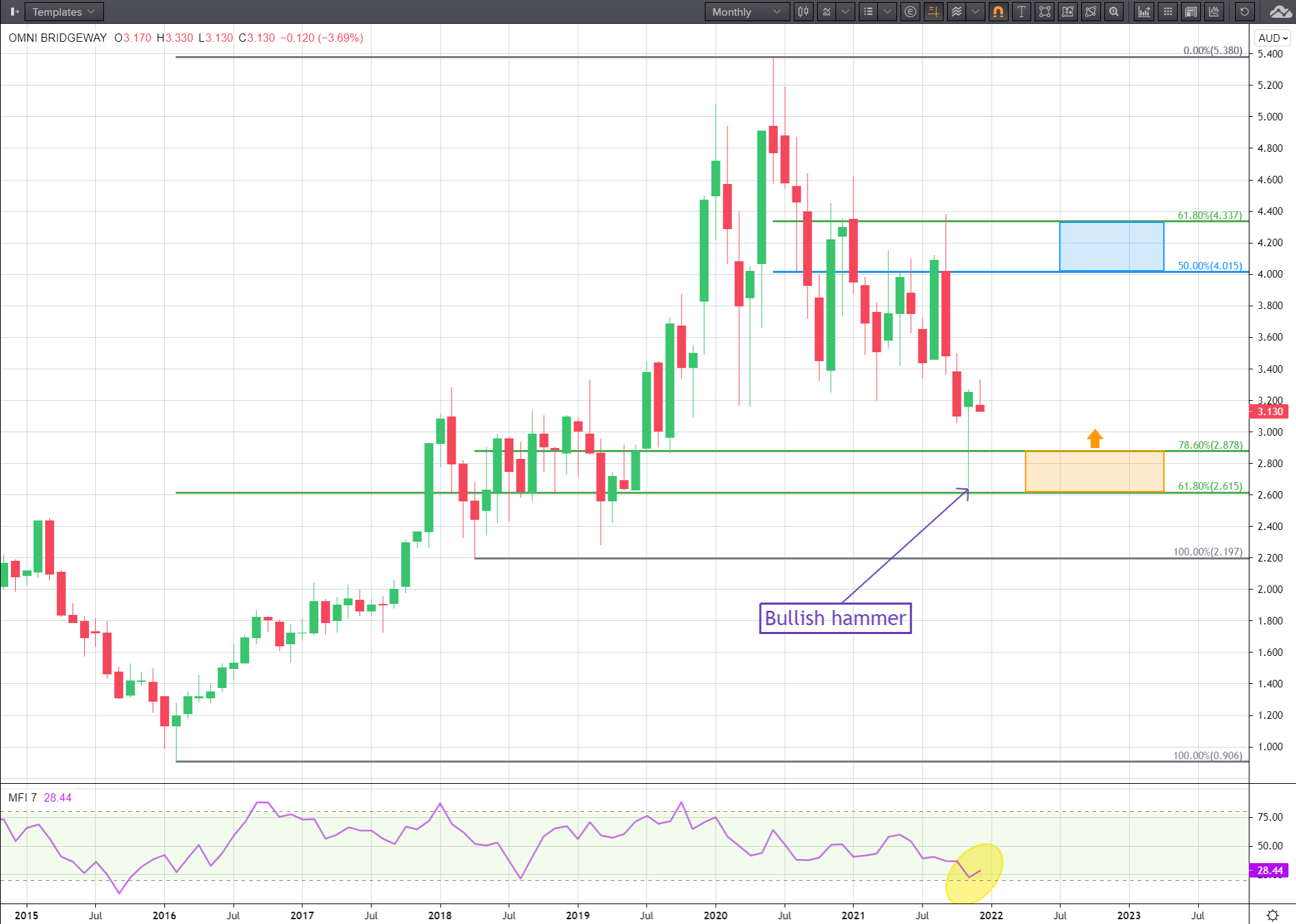 There are three companies set to pay eligible shareholders today.

There are five companies set to meet with shareholders.

There is one company set to make their debut on the ASX today. RocketBoots (ASX:ROC). They are a business software optimisation provider.