The Australian sharemarket is slated to open flat after what has been a red market across the globe. Wall St was solidly in the red as investors eye the surge in Omicron cases, along with concerns about the Fed’s speed up of the wind down of its asset purchases program, and the kick-off on the three potential interest rate hikes next year.

Wall St also kept tabs from Washington DC after Senator Joe Manchin dealt a blow to President Biden’s Build Back Better plan. Economists at Goldman Sachs lowered their forecasts for U.S. GDP in 2022 after Mr. Manchin’s comments, citing that the bill’s apparent demise “has negative implications for near-term consumption.” The price of gold dipped below the US$1,800 mark amid this, while the 10-year treasury bond yield was stable, so market participants didn’t seek shelter there but greenback firmed up.

Oil prices tumbled on demand concerns amid Omicron woes. We’ve been watching the crude oil price surge and slump over the past few weeks, though we knew that this was on the cards. If air travel eases due to mobility restrictions, the demand for fuel reduces. The same with any form of transport, hence this volatility and why Omicron is the wild card. However, market participants also digested the disruption in the Libyan oil production. Petroleum Facilities Guard, a paramilitary force closed their largest oil field ahead of the presidential election on Christmas eve.

Across the S&P 500 sectors, the sell down was almost across the board with a flat finish from utilities, and consumer staples. Financials led the declines with Goldman Sachs down 2.7 per cent, while JP Morgan lost 1.8 per cent, followed by materials, and industrials.

In company news, Moderna shares closed 6.3 per cent lower after preliminary results showed that its booster dose of its Covid-19 vaccine provides stronger protection against the Omicron variant. Shares did jump 9 per cent but then fell in tandem with the market.

There was a bright spot with cruise line giant Carnival closing 3.4 per cent higher. The company missed quarterly earnings estimates. Though the CEO expects a profit by the second half of next year.

We are certainly seeing a lot of red ahead of Christmas, when usually it’s a time of cheer. The much hoped Santa Claus rally is waning with Covid uncertainty escalating.

The yield on the 10-year treasury note rose 2 basis points to 1.43 per cent, gold dipped on a firmer greenback.

Asian markets closed lower. Tokyo’s Nikkei tumbled 2.1 per cent as fears of stagflation and an economic slowdown triggered investors. Hong Kong’s Hang Seng sank 1.9 per cent, while China’s Shanghai Composite lost 1.1 per cent despite the People’s Bank of China’s lowering borrowing costs for the first time in 20 months to prop up growth in its economy amid the property crunch.

Yesterday the Australian sharemarket closed 0.2 per cent lower at 7,292 after a late afternoon recovery, though not enough to take itself out of the red. The losses were led by energy, financials, and industrials sectors as crude oil prices tumbled while shares in Magellan Financial (ASX:MFG) and CIMIC (ASX:CIM) crashed.

Magellan (ASX:MFG) confirmed the loss of its biggest investment mandate with St James Place which makes up around 12 per cent of Magellan’s financial year 2022 group revenue.

Cimic (ASX:CIM) responded to an AFR article to claim it had no further Middle East financial exposure amid claims of unpaid staff.

Both these stocks notched as the worst performers of the session with Magellan Financial (ASX:MFG) closing 32.9 per cent lower at $19.70, followed by shares in Cimic Group (ASX:CIM), and Nanosonics (ASX:NAN).

On the brighter note, the best-performing stock was BlueScope Steel (ASX:BSL) closing 4.1 per cent higher at $21.91, followed by shares in Viva Energy (ASX:VEA), and Clinuvel Pharmaceuticals (ASX:CUV).

In other news with Viva Energy (ASX:VEA) its share price climb of 3.7 per cent to $2.23 came after a jump in its income forecast. The fuel provider to Coles Express expects earnings in calendar 2021 to double from last year despite third-quarter lockdowns in Victoria and NSW, and border closures that have impacted aviation sales. Viva said it had had strong fuel sales growth across both its retail and commercial segments. Its total sales volumes are expected to rise 5 per cent for the year ending December 31.

Switching gears, if you look to the SPI futures, it is pointing to a 0.1 per cent gain or a flat start.

Today the Reserve Bank meeting minutes from the December meeting on the 7th.

Nine Entertainment (ASX:NEC) has inked a $650 million five year deal with the NRL to broadcast its 2023 to 2027 seasons. Nine will pay $115 million cash a year, with a further $15 million in contra and other services. Shares in Nine Entertainment closed 1.1 per cent lower at $2.73 yesterday.

Our weekly stock to watch this week is BHP Group (ASX:BHP). David Thang, Senior Private Wealth Adviser at Sequoia (ASX:SEQ) rates BHP Group as a buy. From a technical angle, BHP Group is bullish for a number of reasons.

Since printing a high of $54.55 in July, a sharp sell-off in share price followed, which resulted in the circa 35 per cent decline over a three and a half month period. Positively, support was respected at the 61.8 per cent Fibonacci retracement of $35.70 as shown by the green horizontal line and orange arrow. In addition, a double bottom formation completed, which is a positive signal.

Should buyers remain in control over the weeks ahead, then a broader advance towards resistance sighted at the 61.8 per cent Fibonacci retracement of $47.30 could potentially be on the horizon. 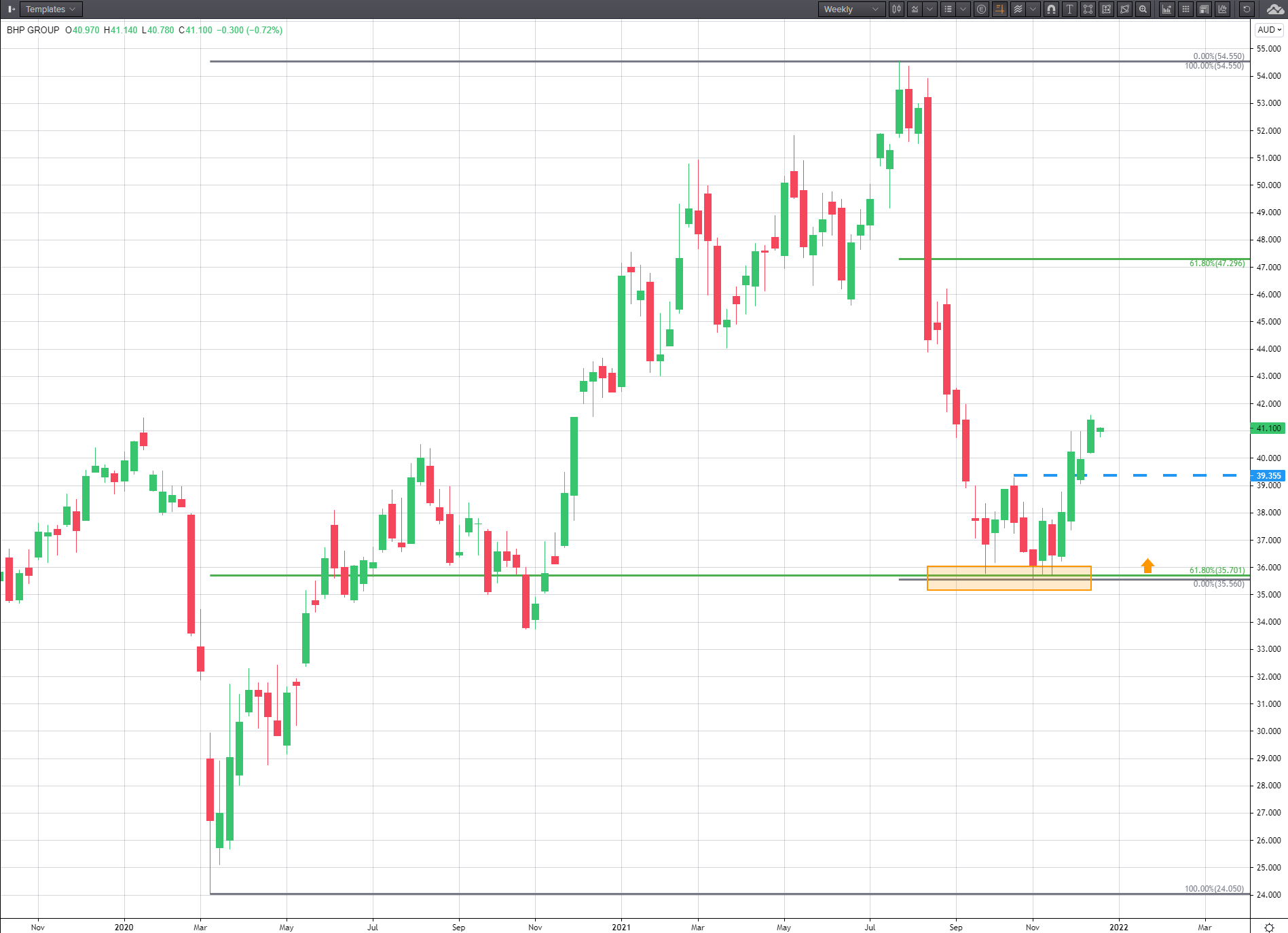 There are seven companies set to meet with shareholders including Alto Metals and Webcentral Group.